Ok so are you guys ready for part two? Here’s part one if you missed it: Taking a Bite out of the Big Apple Part #1 Sorry it’s taken a while, it’s that darn thing called life getting in the way again! But yeah, here we go! 🙂
We began our day by marching through Times Square and down into the subway. I was greeted with a blissfully metallic smell and bustling people all with determined grimaces on their faces. I have to say I absolutely loved the subway, discovering it was one of the best parts of the trip. It’s so different to the London under

ground with a much more urban stripped back feel. I love how when you stand on the platform and the train rushes through you feel like your going to be blown away like Mary Poppins! It really is like entering a different world, like Alice falling down the rabbit hole. (Ok, I’ll stop with the book references now :P) At several platforms there were aspiring musicians, and the subway provided some fantastic acoustics; melodies of jazz and gospel bounced off every wall. We got off at the Staten Island Ferry, where we joined the commuters to catch a glimpse of the Statue of Liberty. Unfortunately it was a pretty cloudy day, but an amazing sight all the same.
After coming full circle we exited the Ferry and ambled idly through Battery Park, the world financial centre and The Sphere memorial. Along the way we encountered some very friendly squirrels. They were so tame that this man was able to feed them nuts straight from his hands, and they began climbing all over his body and up his trouser legs! 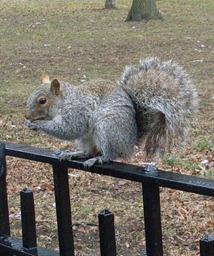 We then stopped for lunch in Chinatown/Little Italy, which was actually nothing like I thought it would be. It was a lot more run down, and un-scenic than I imagined. While in the area we also popped over to the famous Deli that features in the film Where Harry met Sally.
The rest of the daylight hours were spent shopping down 5th Avenue searching for souvenirs and closely inspecting the New York fashion. Of course, I was much more interested in the huge Barnes & Noble with two huge floors of books (to my companions dismay) since we don’t have that store in England.
The final event of the day was Broadway, hurrah! I chose to go and see The Phantom of the Opera which was absolutely fantastic. I’ve never been a fan of opera but still enjoyed it immensely, I got tingles down my spine from the way the actors were able to convey every emotion of the character, the singing was so breathtaking, I was completely in awe. 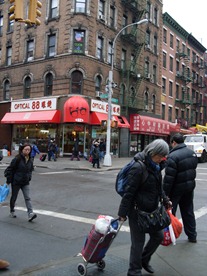 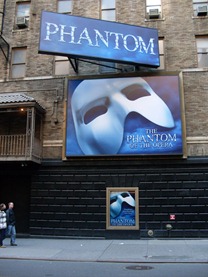 Day four began with another trip on the subway, this time to Queens to visit the Museum of Modern Image, a fascinating place! We took part in a stop motion workshop and then were given free reign. They had so many amazing masks and puppets including many from Star Wars, (Yoda being the coolest!) the girl from the Exorcist, models from Black Swan, costumes for films such as The Dark Crystal, and even several of the Muppets were present!
When it was time to move on we exited stage left and continued walking until we reached Chelsea Market. (Which wasn’t very market-ey in my opinion.) Here we paused for lunch and waited for our tour guide to arrive.

After a short rest our tour guide led us through the Meatpacking District, and the dock where the Titanic was supposed to arrive before ascending the High Line. This was originally an elevated railway line that ran through the buildings when New York was industrialized. However when the industrial side collapsed it became useless. But nothing goes unused in New York for long, and so it was converted into a pleasant walkway surrounded by tree’s and flowers.

After walking a considerable way we descended from the High Line and continued our tour which took us past the famous Hotel Chelsea where many people have stayed including Dylan Thomas, Pink Floyd and The Sex Pistols. After gawping in awe we hopped on the tube again to our final destination, the Brooklyn Bridge.

This was, without a doubt, the biggest highlight of the trip for me. The amount of times I’ve caught scenes on TV showing the Brooklyn Bridge and sighed longingly….I can’t even count. With wide eyes, a gawping mouth and an unsteady walk I tried to take in everything around me. The beautiful stone form, the unbelievable symmetry, the picturesque view. I could have stayed there for hours absorbing it all.
Dinner that evening was an experience in itself. Tucked away in it’s own little corner of Times Square was Ellen’s Stardust Diner. Ellen’s is the home of many wannabe Broadway actors that sing, dance, and prance around on tables while you eat your meal, and if your unlucky enough, they try and get you to join in. I tried to take pictures and video’s, but unfortunately they didn’t come out very well. So a YouTube clip will have to suffice:

The guy featured in the video was actually there when I went as well, I’m not entirely sure if he was compos mentis! It’s kind of one of those things that’s almost so abnormal/random/horrifying you can’t look away! :S

(Sorry for the long-ness of this post guys, the end is nigh!)

My last day in New York our group hopped onto the subway once again, and made our way to the Guggenheim Museum of art, followed by the Museum of Modern art and I have to admit, apart from the architecture of the place, I wasn’t really enthralled. One exhibit for instance, was screwed up pieces of red paper on the floor. This was apparently something to do with women’s rights. Do you think they’ll excuse me for not getting it? 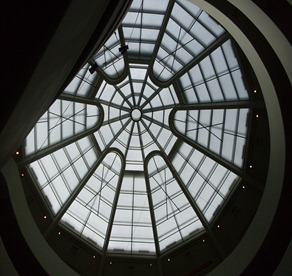 We then took a quick detour back into Central Park to check out the Alice in Wonderland Statue, and then that was it! It was time to pack our bags and head home. On the plane home I read the first third of Mockingjay which luckily managed to distract me from feeling as sick as I did on the plane journey there. Yay! Speaking of which, hopefully my review for Mockingjay will be up for you guys to read soon as I finished it ages ago but just haven’t gotten round to writing my post on it.

Hope you’re all having a great weekend! 🙂