You know the saying right? Good things always come in three’s. Only for me it’s not just a saying, it genuinely seems to happen, and the same also goes for bad events. For example, a couple of years ago, we had a power cut at school, then the next day our pipe sprung a leak, and then we had another power cut at home. I’m sure you’ve all encountered this weird rule of three right? I can think of so many other examples, three electrical products breaking all at once, (in my case, the washing machine, the kettle, and my straightners) or three good events happening in succession. It’s strange right? Even when writing, when we want to validate a point we often use alliteration or repeat the word three times. Heck, there’s even a Rule of Three in writing – A principle in writing that suggests that things that come in threes are inherently funnier, more satisfying, or more effective than other numbers of things.

Perhaps the answer lies in the history of religion? Christianity, for example puts a huge emphasis on the number three. Jesus rose from the dead on the third day, and perhaps the more well known example is The Holy Trinity. The three central focal points of Christianity; The Father, The Son, and The Spirit.
The Wiccan religion (which I believe Christianity used to inform some of their own practices) also seems to revolve around the Law of Three, or the Threefold Law, which many of you may know from it’s similarities with karma. The essential idea is that whatever energy you put out into the world, it will be returned threefold. For example, if you murder someone, that’s negative energy, and so that will be returned to you, but three times as bad. Oh yes, I like this law, payback’s a b***ch 😉

Hmmm….before I started writing this had no idea I knew so much about religion……! Pease feel free to correct me if any of this stuff is wrong. 🙂

So what do you guys think? The mysterious Rule of Three: An utter coincidence? Some kind of weird wiring in the human race? Or something else entirely?

So, what actually sparked this post off was, yepp, you guessed it, three good things happened to me. Thank you Rule of Three’s! 🙂 In an attempt to avoid another boring blog award post, I thought I’d structure this one a little differently. 🙂 To explain, I received the Versatile Blogger Award from JumbledMinds, then I received several more Blogging Awards from Novel Journey’s,and today I woke to the happy realization that Chris over at Write to Perfect had given me another award! Thank you so much Chris! You have a great blog and I wish you all the best of luck with your writing and your latest book 🙂 You guys should go check him out, especially if your a fan of Steampunk fiction.

For this award I have to list 7 things about myself that my readers would find interesting boring:

1) I am not a morning person.
2.) When I talk to animals I put on this weird kidish voice.
3.) I dislike cereal, and have recently gone off toast, which makes the mornings somewhat problematic.
4.) I’m always tapping my foot, nodding my head, or swaying to some invisible beat that no one else can hear. Luckily my best friends have accepted this strange trait :S
5.) I love country music, it’s just…..ugh I can’t even describe it. I wish I had a country accent, I love the way words sound when they express them.
6.) I have a Twitter account @FuzzySippers22, feel free to add me 🙂 (shameless self promotion, I know, but I’m running out of ideas.)
7.) Urmmm….I like……um…Fajitas?

Next, I am supposed to Nominate 7 bloggers and let them know they’ve been nominated.
Well, here’s where I’m going to cheat a little bit. I would like to nominate this Kreativ blogging award to………

Every single one of you.

All the blogs I follow are amazing, and the blogs that follow me are even more amazing! Thank you so much for tagging along with me on my blogging journey, I appreciate every comment, and every like and I just couldn’t chose between you all 🙂 So this one’s for you! Feel free to parade your badge proudly on your own blog (like I do, I love a good label :P) or again, if you are not interested, don’t feel obligated and just ignore it 🙂 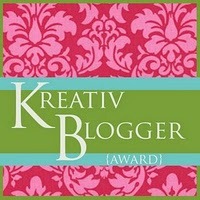 P.S. I am still very interested to hear anyone’s opinion’s on the mysterious Rule of Three! 🙂