Overall Impression: A disturbing insight into the deranged mind of a sociopath.

Ok, so I didn’t pick this book out of choice. It was set as 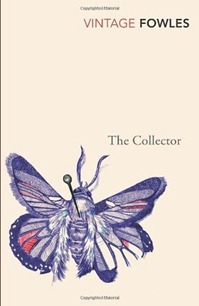 required reading for my first module on my Creative and Professional Writing course. Previous to this I knew nothing about the book or the writer, so I went in blind! We haven’t actually started discussing it yet so my thoughts on it may change in the next few weeks. But for now, on with the review! 🙂

Withdrawn, uneducated and unloved, Frederick collects butterflies and takes photographs. He is obsessed with a beautiful stranger, the art student Miranda. When he wins the pools he buys a remote Sussex house and calmly abducts Miranda, believing she will grow to love him in time. Alone and desperate, Miranda must struggle to overcome her own prejudices and contempt if she is to understand her captor, and so gain her freedom.

I think that’s all the plot explanation you need; the premise is quite simple as the books emphasis is heavily character driven and busting with social commentary rather than plot points.

John Fowles writing is a hard one to critique in this case because I didn’t like it. In fact, I think the point is that you are not supposed to like it. There are no elaborate descriptions to paint a bright picture of the settings, places or people. The writing feels clinical and very matter of fact, and I think this is supposed to reflect the way that Frederick views the world; his detachment and his negative outlook on society. So for this very reason I cannot say that I enjoyed his writing style, it didn’t inspire me and it didn’t make me want to pick up any of his other works, but at the same time I recognize that the message he wanted to convey couldn’t have been done any other way, and it is very effective.

The structure of this book is very strange. It doesn’t have chapters as you would expect, but instead is split into four sections. The first works as a prologue of sorts, the last an epilogue, while the two main sections portray different sides of the story; one from the captor Fredericks point of view and the other from the captive, Miranda. Again I understand what Fowles was trying to do here by contrasting the two characters viewpoints, but I found it a bit frustrating. Although events move slowly in this book with very little happening, it doesn’t feel that way at first while you are reading it because Frederick is such a compelling character, even if you are somewhat repulsed by him you want to continue reading, intrigued to see how events will escalate. However just when you reach the finale of the story you are cut off, and have to go through the entire events of the book again but from Miranda’s perspective. I felt that this really interrupted the flow of the book. Miranda’s point of view was far less interesting and I found it very hard work to get through.

Another aspect of the plot that I found intriguing, but also the most irritating were the themes and messages Fowles was trying to convey. Throughout the book, (although much more noticeably in Miranda’s section) Fowles warns of the dangers of social class. How the gaps and misunderstandings between the working class and the middle class can breed contempt, as well as many other debates (for instance one of the more interesting theories I found was the idea that the poor only have better morals because they have to in order to survive, but if they are lucky enough to be elevated to the middle class they will become equally bad or even worse, because they do not know how to use their money.) However, it is safe to say that Fowles is no Jane Austen. He doesn’t subtly influence the readers existing views but rather beats you over the head with it until you submit. At some points I did consider sending an angry email to the other side telling him to shut up, lol! The problem is that it just felt too preachy to be effective to me, and it didn’t help that I actually disagreed with quite a lot of his views. Was it though provoking? Absolutely. But it was also irritating.

Fowles also makes several literary reference in The Collector, some of which I fear were completely lost on me. The one’s about Jane Austen’s Emma I got, the one’s related to The Tempest by Shakespeare however I mostly still don’t understand. The main characters share names with several of those in The Tempest, but because I have never read it it didn’t really add any depth to the characters for me I’m afraid, although I did research it a little. 🙂

The characters in this book were really well done. Frederick is very believable and Fowles could easily have gone down the stereotypical route of making him a one sided evil individual, but the fact that we are centred in his point of view means that we are able to see the logic behind his twisted mind so that to an extent, you empathize with him even though you don’t like him. Miranda on the other hand is vain, conceited and incredibly irritating. I thought that this was a really interesting role reversal, to make the reader empathize more with the captor than the captive, and it made a really interesting dynamic. There aren’t really any other characters in the book. A few others are mentioned in moments of contemplation but we never actually meet them, only hear about them.

I would recommend this book to people that are interested in philosophizing about the meanings of class, art and love. Who like a bit of a disturbing read that makes them think and are happy with a simple plot to keep them entertained. Both males and females 16+ will enjoy it. 🙂

Writing Style: 3/5
Originality: 4/5
Entertainment: 3/5
Character Development: 4/5
Would I recommend this book? Not really, but it was interesting.

17 thoughts on “The Collector by John Fowles Review 3/5”