Ohhh my freaking god. What did I just witness? *cue crazy eye

d look*
As a person with a love hate relationship with The Twilight Saga, I was pleasantly surprised by how good Breaking Dawn Part 1 was. Unfortunately this time I was pleasantly horrified, and well….a little bored to be honest.
Still, it’s weird to think that this was REALLY the last film in the series. As one of my friends put it ‘Wow, when we walk out of this cinema Twilight is over, our teenage fangirling years are over’.
There are a lot of great memories I have in relation to Twilight. Friendships formed, endless laughs and inside jokes, and a lot of traditions, but I am definitely ready to move on from it.

Plot
So we left the last film with Bella (Kristen Stewart) giving birth and being turned in to a vampire. Shock! Horror! What a cliffhanger! (Actually sarcasm aside I have to give it to them, it was good.)
We begin part 2 with Bella reveling in her pale immortal awesomeness and fake eyelashes. Edward (Robert Pattinson) gets super excited that they’re the same temperature now, and they head out for Bella’s first hunt. She has a close call with a rock climber who almost becomes a meat sandwich, but she utilizes the power of self restraint and goes for a mountain lion instead. She begins to settle in to the role of being a mum, a vampire and a wife. This girl can multitask!
But there is just one problem; the Volturi receive news from an unreliable source that the Cullens have created an immortal child. A human changed as a youngster that will never age that reeks destruction and chaos. But Bella’s daughter Renesmee (Mackenzie Foy) is different, she was born and has human blood running through her veins. But will the Volturi believe that? A band of weird and wacky vamps (some relations, others old friends) prepare to stand together for their vampire rights.

The Verdict
Again like the previous film I feel the need to break this review into pros and cons because well, there is no logical train of thought with Twilight!

Pros
1.) I loved the cottage that Alice gave Bella and Edward as a post wedding/baby/you’re alive! present, it was really cute and old fashioned. I would love to live somewhere like that one day, you know….if I had the bank balance to pay for it.
2.) The fact that it’s Twilight, and that while it’s unbelievable cringe-ey and ridiculous, it’s in a kinda hey, this is really funny, I’m being entertained by the idiocity way! 🙂
3.) Bella’s awesome fake eyelashes, I really must find out who her provider is.
4.) Robert Pattinson’s face when he does that dorky little smile thing.
5.) TAYLOR LAUNTNER. Need I say more?
6.) The imprinting wasn’t as creepy as I thought it would be.
7.) You can tell I’m running out of good things can’t you?

1.) It took at LEAST 20 minutes for Launtner to take his shirt off, now that is just not acceptable.
2.) Bella acting like a mum. SO WEIRD. It just didn’t look right, it felt like she was playing a role in comparison to Pattison who did a lot better. Somehow Stuart doesn’t seem the maternal type…I bet you if you gave her a house plant, she would kill it.
3.) No continuity. It seems that with each new Twilight film the abilities of vampires keep changing and getting more dramatic and ridiculous. Since when have they been able to scale flat rock surfaces? That’s a Dracula move, not a Twilight one! Tree’s sure, they have branches. Another baffling moment was when Renesmee was catching snow flakes and she oddly glided up in the air to catch one, practically stopping midair. Like whaaa…? Vampire can’t fly, and that’s what they made it look like. I think maybe it was supposed to be in slow motion, but if so, it’s the worst weirdest slow-mo I’ve ever seen.
4.) Bella’s wardrobe. She changes into a vampire and suddenly becomes fashion conscious? Yeah that makes sense. What happened to your trademark jeans and plaid Bella? Huh? HUH? Just because you’re a new sparkly vampire doesn’t mean your too good to dress like a normal person.
5.) Alice remains her normal freakishly controlling self where she feels the need to improve Bella’s life (refer to point above and point 1 in the pros section.) has she never heard Brun 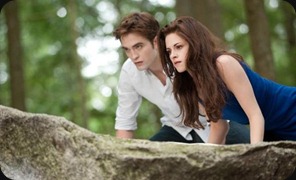 o Mars’ song Just The Way You Are???
6.) When Bella is first turned into a vampire she shows unnaturally impressive self restraint in terms of her bloodlust and adapting to the change, apparently because that’s part of her super duper vampire power but I thought this was explained terribly. It  just comes across as a convenient plot twist, whereas in the book it was explained in a lot more detail. In comparison the film comes across as – hey, I’ve been a newborn for like five seconds and I can already resist bloodlust in comparison to my husband Edward who too 3 movies to get over it. Cause’ that makes all kinds of sense.
6.) Renesmee – All she does is stand there like a startled rabbit and touch people’s face. CHARACTER DEVELOPMENT PEOPLE.
7.) They kept my favourite scene in like I was hoping when Bella and Emmett arm wrestle, but it wasn’t given enough screen time and didn’t have any of the humor or impact that it did in the book.

8.) In comparison to the previous film Breaking Dawn Part 1 where I noted ‘I didn’t at any point check my watch to see how long the film had left, unlike when I went to see the other three films’  this one had me checking my watch far more than all of the previous ones combined.
9.) The last and most important point: The ending! Wtf man, WTF?!? I’m still angry and reeling from it. Deviating from the book for a cheap trick that will only work once. It’s not so much that they changed it from the book, lets face it, we’re all used to that.  It was the fact that instead of using subtlety and actually putting some effort into it they just went for the shock factor which will only work once. I mean, when everyone watches it the second time it will be a pointless 10 minutes of their life wasted.

I’ve seen a lot of articles saying that Breaking Dawn Part 2 is the best movie yet, but in my opinion, it is the worst of the lot. At the end if the day they didn’t have enough material for two movies, and I wish this stupid splitting the last movie trend created by Harry Potter would go away already.

I had a lot of fun writing this review, can you tell? 😛
What did you think of Breaking Dawn Part 2 and its wacked out ending? Thumbs up, or thumbs down?

QOTD: How do you keep yourself motivated in the cold winter months? Any motivation tips you can share?
QOTD: What’s the last book you read that surprised you?
QOTD: What are you currently reading? Have you finished your first book of 2022 yet?
QOTD: Are you a early bird or a night owl? What time do you usually go to sleep?
QOTD: What are some reads you really wanted to get in 2021 but ran out of time?
QOTD: What’s your favourite magical setting?