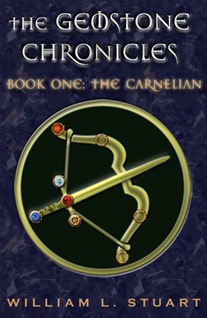 It’s been quite a while since I’ve been able to sink my teeth into a fantasy book, and I’d forgotten how much I like them! I always state fantasy as my favourite genre, and yet lately I have been leaning towards a bundle of YA as the stories are easy to follow when you’re balancing deadlines. I’m glad that this book was able to remind me of my love for the genre. 🙂
The Carnelian is the first book in The Gemstone Chronicles series, and was offered to me in exchange for an author interview, book giveaway and an honest review. I really enjoyed the book and am looking forward to seeing what will happen in the next installment!

When Aidan and Maggie find a fairy cross while rock-hunting with their grandfather, it’s just an oddity. But when they discover there is an elf imprisoned in the stone and set him free, they and their grandparents, Nana and Beebop, are attacked by some Dark Elves and have to flee to the magical world of Celahir where they join the quest to recover the gemstones stolen from the Elven Bow.

Beebop, Nana, Aidan and Maggie are your stereotypical loving family, they don’t have to worry about anything except school and what they might be having for dinner. Yet when Beebop and the kids go rock hunting they come across a mysterious stone in the shape of a cross. Intrigued, they take it home with plans to study it further. But there is something unusual about it, and one evening before Maggie goes to sleep a spectral figure appears begging to be released. Alarmed, Nana insists they get rid of the stone, but the children cannot quell their curiosity. They smash it freeing an elf named Findecano, he tells them of a word of magical creatures, feuding clans and ancient gemstones. The family cannot believe their ears, but when their house is ransacked by an angry troll they are forced to accept that the stories are true. Findecano, worried for the families safety, leads them back through the veil to the elven world where they will embark on an epic journey to restore the balance of power between the two worlds.

This book is so fun and cute in every way! But lets start with the writing.
Stuart has a great style that lends itself really well to the fantasy genre, it actually reminded me a little of Neil Gaiman’s Stardust. Everything has an air of lighthearted fun and magic, settings and people are described with an almost childlike wonder that makes the story feel fresh, and you can’t help but get swept up within the first few pages. The book is aimed at youngish children and the writing reflects this, it’s simple and easy to understand but without talking down to the reader or becoming patronizing.
There are however, a few issues that need to be ironed out that I’m sure will come naturally with practice. I found some of the descriptions difficult to follow at points, specifically in reference to the gemstones. This was probably because the author knew exactly what he was talking about, but to me as a reader with almost no knowledge of them I did get confused with some of the terminology.
There was also a lack of contractions during dialogue (hey check me out, I learnt a new word!) which is something I found with a past indie author. For example “We are all sleeping in here. I will stay up and keep an eye on things,” this would be totally normal for description, but as speech it’s quite jarring as most people don’t speak like that during everyday life. We’re lazy, we like our apostrophes’! 😛 I also felt that changing this could make the distinction between the humans and elves more prominent. 🙂
The final issue I had was the lack of synonyms at certain points in the novel. For example –

‘While she worked, he watched the elves build the fire pit and the spit. They first dug out a round area about a foot deep using wooden shovels they had fashioned, and then ringed it with stones both inside the pit area and around it on the ground. They placed the uprights for the spit on the outside of the stone ring ringing the pit, noting with approval the work Aidan had done.’

The majority of the book was very well written and flowed perfectly, yet there were some passages sprinkled throughout that were overly repetitive. While in theory this may not seem like a big issue, each time it happened I found myself catapulted out of the story because it didn’t flow, and this was quite frustrating.

I thought the plot of this book was excellent! I’m not sure why I had a preconceived idea, possibly because the book was aimed at children, but it was detailed and complex! All the storylines were well thought out and the world building was impressive. I loved the idea of gemstones with different properties, strength, protection, etc and Stuart’s own additions to elf mythology. The concept of elves living as long as it took them to fulfill their purpose whether 20 years or 200 was intriguing to me and the feuding clans made a great backstory. Equally the Celtic folklore on the Kelpie (a magical beast in the form of a horse that lures travelers onto its back and drowns them) was a really interesting as I had never heard of it before, and I’m always interested in discovering new mythical creatures! The parallel’s with the human world and the idea that an unequal balance of dark and light on the elves side was affecting our world in the form of natural disasters and global warming felt really innovative too.

What I loved best about this book though was the characters. They were all so crystal clear in my mind that I could picture exactly what they looked like and how they would sound, not from their physical description but from their personality which is how it should be. Beebop an ex navy submarine operator makes the perfect grandfather with his sense of humor and quirky hobbies. He is always finding ways to entertain his grandchildren from rock hunting to teaching them how to drive. His wife is probably the most badass nan I have ever come across. Not only does she blog, she also knocks out a troll with a frying pan without a moments thought. Go Nana! 🙂 I also liked the fact that the two grandchildren, Aidan and Maggie although not as developed, were given strengths in different areas. While Aidan relied on muscle during the book Maggie’s power laid with her mind, but both showed large amounts of courage in the face of adversity.
Findecano the elf was also a very entertaining character, and his interpretations of the human world and their customs often made me chuckle!

The Gemstone Chronicles: The Carnelian is a fun book that would make perfect family bedtime reading. As an ideal audience I would recommend it to children ages 7-13, as the characters Aidan and Maggie will reflect their own secret fantasies, wishes and dreams. However, this book does not have limited appeal, as a teenager I really enjoyed it, and I think many adults would enjoy it too! I am looking forward to seeing what happens in the next book. 🙂 While there are a few writing issues that need to be sorted, this book is getting a happy 4 stars because my heart says so. 😛

Want to know more about the author? Don’t forget to check out my interview with William L. Stuart here!

I’ll leave you with a fun quote:

‘The gems he fashioned were not fine jewelry, but they were attractive and, unlike store bought stones, these had a story behind them.’

14 thoughts on “The Gemstone Chronicles: The Carnelian by William L. Stuart Review 4/5”