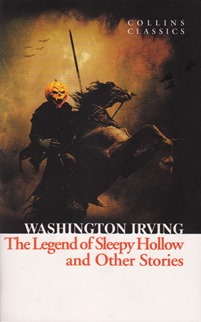 Phew, I am so glad to have finished this book! What a slow journey, at times I didn’t think I was ever going to finish it. I should mention however, that the reason for my negative rating is to do with this specific edition of the book by Collins Classic. The short stories – my original reason for purchasing, were entertaining and historically interesting. I set out only to buy the famous short story Sleepy Hollow but discovered this edition was cheaper. Getting more pages for a better price seemed like a win win at the time. Hm, turns out not so much… the title is clever, it tends to suggest the book will be full of chilling stories when in fact, there are only three (73 pages worth). The rest of the 332 pages are non-fiction, not quite what I had in mind!

Featuring ‘The Legend of Sleepy Hollow’ and ‘Rip Van Winkle’, this collection of inspired essays, stories and sketches established Washington Irving’s reputation as one of America’s foremost authors. Irving’s timeless characters, including Ichabod Crane, Rip Van Winkle and the headless Hessian trooper, jostle for space 31 equally atmospheric and lyrical works in this haunting anthology from one of America’s most distinctive literary voices.

Learning about the author himself was actually one of the most interesting parts of this book! Before I began I had no idea how crucial Washington Irving’s work was to literature, he apparently was one of the first to successfully bridge the gap between America and Europe. He is named as one of the first authors to bring up the idea of copyright to protect author’s work from being plagiarised and was great at using marketing to his advantage. He created the pseudonym Knickerbocker and put up missing person posters suggesting the author had mysteriously disappeared to help gain a buzz of interest around his work. He also created the Christopher Columbus myth that they feared falling off the edge of the earth to create added suspense, when in fact it had already been proved the earth was round. Among his other claims to fame is a supposed liaison with Mary Shelley author of Frankenstein and dabbling in Spanish politics. This guy was busy! Phew.

Irving’s writing style is interesting in the fact that his fiction reads exactly like his non-fiction, a strange trait. I think this is because the non-fiction is rarely based in fact and instead tends to rely on his observations of others and weighty descriptions. He is great at building a narrative, sweeping the reader up into one of his mysterious short stories and ending on a note that makes you want to hear more, yet I have to say I never really warmed to his writing. I appreciated his way of crafting a story but for the most part his prose felt somewhat self indulgent to me. I thought Dracula was bad with the author’s love of semicolons but Irving takes it to a whole new level! A lot of his sentences last a whole paragraph which in some cases can be half a page. This isn’t necessarily a bad thing as long as you mix up with some smaller ones too, but this rarely seemed to happen which made reading quite exhausting. This seemed even more prominent because there is barely any dialogue, not even in the short stories. This may have been a reflection of the way he wanted to portray the story but I have to admit I wasn’t really a fan of it.
I was also displeased to find, that like the Brothers Grimm, his stories were based on tales he encountered on his travels, rather than ones he made up himself! Hmmph.

I will start by talking about the short stories which for the most part, I really enjoyed! Rip Van Winkle was the first I encountered about a man who is great at dealing with everyone’s business except his own. One day in an attempt to avoid his responsibilities he makes a trip up the mountains and when he gets back down he seems to have fast forwarded through time. I thought Rip Van Winkle was really fun with a definite wistful fairytale feel about it. Irving’s descriptions painted a clear picture of the quaint surroundings and the people that lived there and for such a short tale it worked really well. The characters felt surprisingly fleshed out and Rip carried me along with him on his journey; I felt the same annoyance at his wife’s nagging, his joy at escaping for the day and his confusion on seeing that his home ceased to exist as he had known it. I give this tale a happy 3 stars.

The second short story in the book was The Legend of Sleepy Hollow, or as many others know it, the tale of the headless horseman. In this we follow a school teacher named Ichabod Crane, an odd fellow who relies on the townspeople to lodge him, staying at a different house each night. He is a newcomer to Sleepy Hollow, a place where elaborate stories and mysterious happenings are frequent, but none are more well known than that of the headless horseman, a ghost said to terrorise villagers looking for his missing head and in the hopes of finding a new one.
Although this is the most well known and longest story of the three, it was actually my least favourite because to me, it showed up some of the main issues I had with his writing. The imagery was great, striking a balance between the magical and the sinister. However, the majority of the story I found extremely dull, there were a lot of pointless pages full of endless descriptions with no bearing on the plot. I found myself flicking forward regularly to see how many pages of the story I had left, and there was a lot of exasperated sighing on my part. Again the main reason for this I felt was the lack of dialogue, it doesn’t become an issue with the other stories because they are short, but this one was 32 pages and without dialogue to break the story up it really drags and there is so much telling rather than showing! For the same reason I didn’t get a sense of the main characters, you are told what they look like but don’t get a chance to see it in action with the way they speak. That being said, I absolutely loved the ending with the headless horseman chase, I kept looking over my shoulder to check no one was there, it was a great atmospheric, creepy ending, it’s just a shame that it took so long to get there. I give this tale 2 frustrated stars. 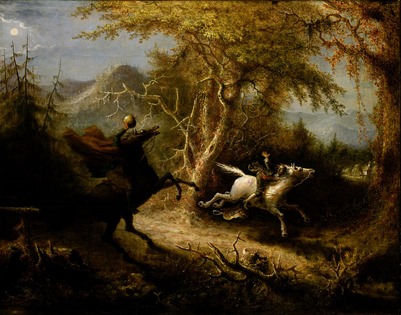 The final short story and my favourite overall was The Spectre Bridegroom. The prettiest young girl around (because they are always the prettiest and fairest in these stories don’t you know?) is set to be married to a returning soldier. The soldier meets a companion along the way and they make the journey back together, but disaster strikes when they are ambushed by robbers and the bridegroom is mortally wounded. He tells his friend to explain to his bride why he never arrived to marry her, or his soul will not rest peacefully.
I thought this story was great, there were a lot of funny elements due to the tongue in cheek narration style. The plot was perfectly paced and there didn’t seem to be any overindulgent descriptions to slow the story down. The characters shone more brightly out of this one as their typical cliché’s were made fun of which made very entertaining reading! One of the aspects I did truly love about all of Washington Irving’s short stories, especially this one is that he leaves them open ended. His narration throughout always suggests supernatural tendencies, but at the end of each he plants a seed of doubt, an alternate explanation and you are left to wonder what really happened. Everything is up to interpretation. This story gets 4 happy stars from me. 🙂

So all sounds pretty good so far right? Unfortunately I felt my enjoyment was heavily impacted by the rest of the book which was a torturous slog through what felt like pointless non-fiction. It mostly covers the authors trips through Europe, especially England and his personal reflections, but that is the only thing they seem to have in common. I did enjoy a few of them, descriptions of his voyage and some of his comments on people’s views on Indians were vaguely interesting, I also learnt a lot of random facts about James I of Scotland, but the majority of them were an utter snore-fest. For example he spent around 45 pages droning on about Christmas and had absolutely nothing of interest to add. WHY IS THIS STUFF IN HERE? I DON’T UNDERSTAND. I struggled to force myself to read it. I know a normal person would just read the short stories and leave the rest, but I was physically incapable of doing that. I knew that it would bug me and scream unfinished from its position on the shelf so I slowly struggled through the whole thing. I’m sure in their original context their existence as pieces of work would probably make sense, but as they stand in this book they are nothing but useless and irrelevant.

A future tip to Collins Classics: DO NOT STUFF YOUR BOOKS FULL OF IRRELEVANT BORING FILLER JUST TO MAKE IT LOOK BIGGER AND MORE WORTH BUYING OKAY? IT WILL BACKFIRE. Thank you for your consideration. (Oooooh look at me, I squeezed in a Hunger Games reference!) 😀

I wouldn’t recommend this version of Washington Irving’s stories unless you are able to bypass the non-fiction without it bothering you. However, I would definitely recommend the short stories in another format to anyone who loves supernatural tales with ambiguous endings left for the reader to interpret. They have a great mixture of fairytale-esk and sinister vibes!