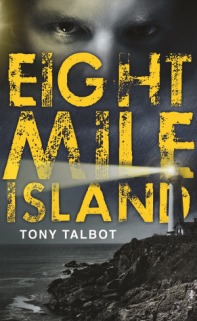 Overall Impression: A creepy and action packed escapade with an elusive mystery that will keep you turning the pages!

I was really excited to read Eight Mile Island; the premise sounded intriguing and I don’t read YA novels from a male protagonists point of view as much as I probably should. Well, I’m glad to say that I wasn’t disappointed, this book sure packs a punch with pretty much constant action from start to finish. If you’re looking for a quick read that will immediately grab your attention then this is the book for you!
Eight Mile Island was offered to me in exchange for an author interview, book giveaway and an honest review.

Dylan James is used to boarding schools. He’s been thrown out of so many in the past two years, he’s lost count. So when an elite academy in Oregon offers him a place, he doesn’t think he’ll be there more than a week.
But Eight Mile Island isn’t like anywhere Dylan has been before. In the dense forests around the school, there are things that look human but aren’t.
Things that are hungry, and waiting…
But that’s the start of the mysteries, mysteries that mean Dylan may never escape.
Even if he wants to…
Welcome to Eight Mile Island.

Only two kinds of people go to Eight Mile Island, the privileged and the intelligent. Enter Dylan, a teen with an attitude problem, a reasonable amount of baggage and an IQ of 150. His mother thinks the island will be a solution to all his problems, but from the moment Dylan arrives he is already planning his escape.
There’s just one problem; Eight Mile Island is not like the other schools, they appear to have an endless budget for computers and high tech software, the two men in change are sinister, tracking Dylan’s every movement and there are rumours of teens disappearing. Soon Dylan realises there are gaps in his memory, fragments that don’t make sense. He hears voices when no one is there and he doesn’t know who to trust. Teaming up with some unexpected allies he searches for a way out, and answers. But the truth is more horrible than he could ever imagine…

The first word that comes into my head to describe Talbot’s writing is engaging. From the beginning of the book I was drawn into the story and it’s characters. No time was wasted on irrelevant details like who ate what for breakfast or pointless back story without purpose, Eight Mile Island never deviated from what was needed or necessary, which made the pages whizz by without any forced effort. The author did a great job of always showing rather than telling which made me feel more involved in the story. The imagery was fantastic, and Talbot was clever to describe all Dylan’s surrounding with a sense of danger, impending doom and hostility which added to the overall sinister vibe of the island. Here are a few descriptions that I loved!

‘On the way back to my cabin, I sneak into the main hall, the unlit chandelier a frozen sculpture of dead glass hanging above my head like a mass of rotting black ice.’ – Pg73

You can see how the use of spooky imagery along with the negative connotations of the words ‘rotting’ and ‘dead’ made the descriptions creepily atmospheric.
The most interesting thing I noted about the writing however, was the use of present tense (e.g. I look, nose twitches, rather than I looked, nose twitched, etc.) The majority of novels are written in the past tense and I have only ever come across one other that used the present. I thought this was a bold and interesting decision that made the book feel a little different and unique. It was an interesting reading experience! Having said that, I found this choice was slightly awkward for me, my brain is so used to the past tense that I kept tripping up over certain sections, even by the end of the book I wasn’t completely used to the tense. Whether this was entirely down to me, certain sections of writing or because the present tense is not as fluid to read I am not sure, I would be interested to see how the book would compare in the past tense, that would be intriguing!

The plot was fast paced which kept me interested from the beginning, even the first scene in the book was full on, sweeping me up straight into the action and refusing to let go! Every time I sat down to read Eight Mile Island I would end up reading in huge chunks rather than a few chapters, because once I started I couldn’t stop. Not knowing what the mysterious… lets paraphrase and call them ‘monsters’ actually were, how they came to be on the island or what they were after kept me in suspense until the very end. Although I felt the fight scenes with them became close to repetitive towards the end they were for the most part very interesting to read about. I also loved how the plot twisted and turned throughout the book as it meant I had no idea where the story was going chapter by chapter. And as for the twist ending, whoa, I had no idea how it was going to end, but I definitely did not see that coming! 🙂

Dylan as a character was great, for all his teen angst, rudeness and general ‘screw you’ attitude to those around him, I couldn’t help but like him. It soon becomes clear all that angst has a reason behind it, and he often uses it to deflect his true feelings and prevent him from having to show any form of weakness. He is sent to Eight Mile Island because of his IQ, which makes him the minority, surrounded by those with money and power. Dylan’s confusion at the gaps in his memory are heightened by the fact that he has always been able to remember everything throughout his life, from what he ate for breakfast 7 years ago to a complex html and I found this quite poetic. It made me sympathise with him even further when the island took away from him the one strength he had always been able to rely on, and that made the place feel all the more horrible. I loved that Dylan was beautifully but subtly developed.
Keiko another trapped teen and Miss Driscoll the teacher were interesting additions as Dylan never quite knew whether to trust them. However, they felt a little hollow to me and I think they could have done with some further development. I believe this was partly due to their role in the book, as a reader I was never sure whether what they were saying was true and consequently I felt like I didn’t get to know them properly.
Dr. Montgomery and Mr. Glaze the two administrator’s of the island made a lasting impression, there was something genuinely sinister about the two of them. The way they bizarrely over emphasised certain words made them all the more creepy and memorable as characters. It was great to see how they progressed throughout the story!

Overall this was a great book, full of action and suspense with a realistic teen character. I would recommend it to anyone 10+ male or female who enjoys the science fiction, thriller or mild horror genres and loves fast paced stories with surprising endings!
I think it would also particularly suit boys aged 10-15 whose parents are trying to encourage them to read because Eight Mile Island is fast paced and engaging, with enough gore and eeriness to seem cool but not so much that it’s inappropriate.

Please go and give this book some love, buy your copy now! 🙂 I’ll leave you with two more quotes I liked:

‘I find the rational part of my mind curled up in a corner of my head and convince it to talk to me.’ – Pg77

‘The fading sunlight lit the tips of the grass with red flames, the stalks and ground already lost to the black in the dusk. For a second, all I wanted to do was rest and paint it: the fading sun, the incandescent red and orange tips of the long stems. I used to think this island was the most beautiful place I’d ever seen. Then I found out the truth about the lighthouse.’
– Pg2-3