I feel like I’ve said this a lot of times now, but this was a tough question! As a general rule I relate to most characters on some level and this probably comes from the fact that writers put a lot of themselves into their books. Aspects of their own worries, moral dilemmas and dreams naturally emerge because of that age old saying ‘write what you know’ which doesn’t just apply to a books setting but also the things you can’t see like emotions.
Again, I’m going to pick the protagonist that popped into my mind first, and that character is Macy from The Truth About Forever.

Well, I couldn’t go this entire challenge without mentioning Sarah Dessen, could I?!?! 🙂

That being said, this is yet another book that I read pre-blog and for that reason I don’t remember it very well. Therefore today’s post will be short and sweet. 🙂

The Truth About Forever was the first Sarah Dessen book I ever read, something to do with the combination of the pretty blues and greens (one of my favourite colour combinations) and the style of artwork (which I just so happened to be focusing on in art class for a project at the time) drew me to it. I did hesitate at first because Dessen’s blurb made the book sound quite superficial, but I’m so glad I took a chance! 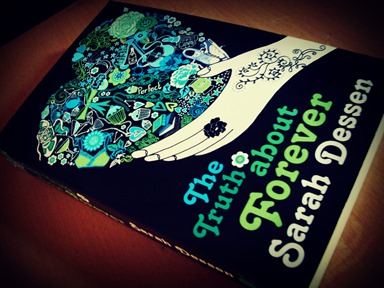 The story follows Macy who after her father’s death puts all her energy into achieving perfection; she tries to be the perfect daughter, the perfect student and the perfect girlfriend. Just when Macy has her safe little routine down, her boyfriend decides to go off to brain camp, leaving her to face the summer months alone. He asks her if she can temporarily fill in at his job at the library, as the dutiful girlfriend she does, but the staff there make her feel unwelcome. Initially Macy is happy to spend the summer the way she has coped with the rest of the year, keeping her head down, grasping at perfection. But when the opportunity of a summer job in a completely different field comes up she feels an unexpected tug. It’s the first rash impulse Macy has had in a long time, and who knows where it will take her…

I related to Macy a lot, like her I can be a bit of a perfectionist, not about all things but some. I like to follow the rules, I like to do the right thing and go with what will please the people around me to an extent. I probably don’t take risks as often as I should either. While I don’t have the grief of a parent on my shoulder as a reason for this, a lot of the Macy’s personality traits in this book resonated with me. I think we can all play it a little too safe sometimes. It’s human nature to stick to what and who we know and it can be easy to get in a rut. I liked that the message of this novel was that taking even one small risk or chance could lead to something different and wonderful, as clichéd as it might sound. I loved watching Macy grow as a character as the book went along and the revelations she experienced, it taught me a few lessons of my own and also echoed some of my thoughts and anxieties.

I think my answer to this question was always destined to settle on Sarah Dessen, she is the master of YA female contemporary characters and even when a protagonist in her book has different values, beliefs or aspirations to me, she always makes me relate and empathise with them on some emotional level. If you haven’t read any of her books yet I would recommend picking one up because she is fast becoming one of my favourite authors. 🙂 If you’re interested I have reviewed several of her books here! I also have a whole stack of her books to read, yipiieeeeeee! 😀

Which book character/s do you relate to the most? Are you a fan of Sarah Dessen’s characters? 🙂

Image Sources:
Header banner: My own image, please do not reuse.
Book Cover: My own.