Okay, so I am going to look at this question as picking from one of my many favourite authors because seriously, I would be here all day otherwise! Since I have already talked about my love for J.K. Rowling, Emily Brontë, Kelley Armstrong, Tolkien and Sarah Dessen these guys are out of the running. So, can you lovely bloggers guess which author is missing? I’ll give you a clue, she’s Australian and I’ve mentioned her many times on this blog before.

I will give you another clue, she is featured in my 30 Day Book Challenge header!

The favourite author I am focusing on is Trudi Canavan, author of the bestselling The Black Magician Trilogy.

Of my own accord I might not have picked up one of her books, but pure chance and maybe a bit of luck intervened. I was at a family party around the age of fifteen/sixteen hanging out with some relatives of a similar age. They were both male and wanted to play Call of Duty and Gears of War. Although they suggested we could do something else I knew they really wanted to play Xbox, so I agreed not minding either way. I played for a while but they were total control hoggers and eventually I lost interest. After an hour and a half or so I got a little restless and one of the relatives knowing I liked books asked me if I had heard of an author named Trudi Canavan. I hadn’t so he brought in the books to show me, The Magicians’ Guild, The Novice and The High Lord. It was the beginning of a love affair. 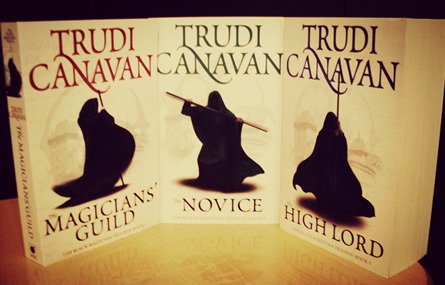 The series follows a girl named Sonea living in the slums. Each year magicians flock  to the poor section of the city to purge the people. In protest the slum dwellers band together to throw rocks at the magicians, to no avail. A powerful magic shield protects them and although those in the slums can’t penetrate it, the action gives them purpose, a sign of resistance. When Sonea gets swept up in the chaos with her mischievous friend Cery, she has no idea what is in store. In a moment of reckless anger, Sonea joins in with the stone throwing and to everyone’s amazement hers soars through the magical barrier and injures one of the magicians. Pandemonium and panic sets in, no one from the slums has ever had the power of magic and no one understands how it could be possible. The Magicians’ Guild must decide what to do with her, but one things for sure, Sonea’s life will never be the same.

The first few chapters of the novel had me hooked. I was swept up in the dramatic scenes and loved Canavan’s vivid writing style, something about it lulled me into this serene calm. If it is possible her writing feels kind of earthy, soulful and serene. I don’t know if that makes much sense but they’re the words that come to mind when I think of her novels. That is not to say everything about these books is serene, there are magic fights and epic conflicts but it is the general feel I get from her writing. Even though the trilogy is set in a fantasy world it feels realistic and tangible. Sonea was such a lovely character and I took to her right away, empathising with her situation and excited to see where her journey would take her.
I have read these three book twice now and they were just as good the second time!Trudi’s Black Magician Trilogy was so popular that she even brought out a follow on, The Traitor Spy Trilogy which returns to the characters twenty years later. I’ve only read the first book so far and can’t wait to get round to the others. 🙂

Canavan’s second lesser known series is The Age of Five Trilogy, which I equally enjoyed but in different ways. This series follows Auraya, a newly appointed priestess. She is one of five who represent the Gods.
The world building in this series blew me away, there were so many interesting concepts relating to the Gods, how they came to be and whether they could be trusted. The moral dilemma’s were fascinating, the new magical creatures inventive and the battle scenes epic!

It is hard to describe what I love about this author, to me it’s just a fact, like the grass being green and the sky being blue. I guess I have been reading her books for so long that it is hard to look at her work objectively, but then, why should enjoying a book have to be objective? 🙂

Who is your favourite author/s? Do you have a favourite fantasy author? 🙂

QOTD: What’s your ideal reading environment/setup?
QOTD: Easy one today! How’s your September reading going? Any new faves? Are you on track with your goals?
Predictive text game! I found a mysterious key, unlocked the ancient door and found a monstrous ___ and it ____ .
QOTD: What’s your favourite Disney movie? Or if you’re not a Disney fan, your favourite animated movie?
QOTD: Do you like books based around sea settings? Please drop me your recommendations! 🌊
QOTD: Who are some of your favourite fictional bookworms?