Yay, another easy question! It didn’t take much thought to come up with this one because there is one book out there that I found to have the most surprising ending AND it was also a plot twist at the same time. 🙂

Yepp, it’s that Trudi Canvan woman again. Are you sick of her yet?

If you said yes, tough, because I’m talking about her anyway! 😛

This is where I say DO NOT READ PAST THE SPOILERS NOTICE BELOW IF YOU HAVE EVEN THE SLIGHTEST INKLING THAT YOU MAY WANT TO READ THE AGE OF FIVE TRILOGY. Or, if you want to anyway, make sure you have one of those Men in Black devices at hand to wipe your memory, because the spoiler in this post will pretty much ruin the entire series for you!
This blog will probably be a bit pointless because anyone who is interested in this series and wants to know more can’t read much of it it, and those that aren’t interested in it can, lol! So I will try and make this a short one today. 🙂

Side note – I’ve never come across anyone else who has read these books, so if you have let me know and we can nerd over the awesomeness!

In the right order, The Age of Five Trilogy is made up of The Priestess of the White, Last of the Wilds and Voice of the Gods.

Here’s the Goodreads blurb for the first book, Priestess of the White:

In a land on the brink of peace – watched jealously by a ruthless cult from across the sea and beset by hidden enemies – five extraordinary humans must serve as sword and shield of the Gods.
Auraya is one.

Her heroism saved a village from destruction; now Auraya has been named Priestess of the White. The limits of her unique talents must be tested in order to prove her worthy of the honor and grave responsibility awarded to her. But a perilous road lies ahead, fraught with pitfalls that will challenge the newest servant of the gods. An enduring friendship with a Dreamweaver – a member of an ancient outcast sect of sorcerer-healers – could destroy Auraya’s future. And her destiny has set her in conflict with a powerful and mysterious, black-clad sorcerer with but a single purpose: the total annihilation of the White. And he is not alone . . .

The rest of the series follows these events as they unfold. The basic world set up is that  the north side of Canavan’s fantasy world is overseen by five Gods (know as the Five) and they also have five representatives – the White. They live a mostly peaceful existence until they get word of murmurs and discontent in the south. Gossip begins to spread and a rumour is heard that the south claim to worship a different set of Gods (known as the Circle). When the White seek advice on this matter their Gods assure them that as far as they are aware, they are the only ones in existence. They warn that these rumours could be dangerous to their world and that it is vital the lies about the Circle be stamped out, at any cost.

Okay, so that probably sounds quite confusing, it was certainly confusing to write anyway! This is a pretty intricate trilogy.

So Canavan spends a lot of time and effort creating the back story between the two separate cultures and their Gods, this is even represented by the varied use of architecture (the White’s buildings are all circular for example). They both vary largely in tradition and we get to know this through acquainting ourselves with characters from each side. 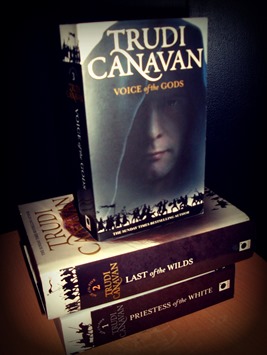 The Gods from the North are:

The Gods of the South are:

The more you get to know about this series the more you realise something isn’t quite right.
Can you spot it?

Turns out the big finale is that the two different sets of Northern and Southern Gods are actually the same Gods!!! They have in fact made up two entirely different religions built around slightly varying practices, but with the same basic principles. The Gods had gotten so bored with their immortal existence that they decided to have some fun with the world by starting wars. They built up both sides of the conflict, whispering in the ears of those with power, moving them like chess pieces curious to see which side would better the other. This plot twist literally blew my mind, I sat staring at the book for ages with my mouth agape. When you look at it written down it seems so obvious. The Gods names even sound the similar, they are just spelt slightly differently and while they appear to stand for different things they don’t, God of War vs God of Warriors, God of Wealth vs God of Gambling.
Sneaky Canavan, sneaky!

The funniest thing is, I noticed a few of the connections between certain aspects of each religion and their Gods, but I thought it was because of bad writing! I assumed Canavan was struggling to find topics her Gods could represent and so she had made them stand for similar things, but was trying to pass them off as different. How wrong was I?! I should have know better.

While this series was slow to build it was entertaining, and well worth the wait to reach the explosive ending! I think I would probably rate books one and two as three stars, and the last book as five. It took some real skill to pull that plot twist off. It is not often that endings take my by surprise these days, I have read so many novels now I have gotten good at spotting them long before they happen, but not with this trilogy! I can’t recommend these books enough. 😀

Gosh, they should employ me to advertise Canvan’s work I talk about it so much!

What is the most surprising plot twist or ending you have come across? I love books that surprise me!

NOTE: Please only name the novel as opposed to telling me the twist, just in case I intend to read the book you mention! 🙂

Image Sources:
Banner: My own, please do not reuse.

20 thoughts on “DAY 25: The Most Surprising Plot Twist or Ending.”