(To read my review of the previous book from the Hush Hush series, Silence click here.) 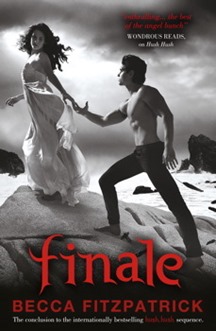 It’s safe to say my relationship with this series has not been smooth sailing. Hush Hush had me simultaneously ripping by hair out at the central abusive romantic relationship while secretly crushing on the smoldering love interest. Crescendo made me furious at the inconsistencies in the storyline but admiring the author’s flair for setting a dark, eerie mood. Silence gave me a level of respite with some fun romance and brilliant dialogue but I was frustrated by the lack of progress in the storyline. As for Finale? Oh boy. I teetered close to the edge with this one. I was hoping for some decent action since this was the last book in the series but what I got couldn’t have been further from it.This book is a culprit of the worst crime against fiction: It was boring.

Please note: For those of you that haven’t read the previous books in the Hush Hush series this review will contain spoilers about previous plots and characters from those novels. This review will not however contains any spoilers for Finale.

Nora is more certain than ever that she’s in love with her fallen angel, Patch, despite her Nephilim heritage making them destined to be enemies. For her, there’s no turning her back on him. But now Nora and Patch must gather their strength to face one last trial. Old enemies and new are ranged against them, standing between them and the peace they so desperately crave. The battle lines are drawn – but which sides are they on?

The war between the fallen angels and nephilim is coming to a head and Nora Grey is stuck right in the middle of it. Nora’s father The Black Hand is dead and she has been forced to become his successor, bound by blood oath Nora must lead the nephilim in their quest for vengeance when all she really wants is a cease-fire. With conflicting obligations she must tread a careful path. With the help of her fallen angel boyfriend, Patch, her best buddy, Scott and a nephilim named Dante, will she be able to defuse a war that goes back centuries? More importantly, will she stoop to using the addictive and dangerous substance devilcraft for additional strength to get the results she needs?

At this point it’s safe to say I’m not a big fan of Fitzpatrick’s writing style, as much as I’ve tried it doesn’t sit well with me. Her writing seems clunky and haphazard. She takes a lot of shortcuts when it comes to plot points and her character descriptions especially make me cringe. Some passages in this book were worded so awkwardly that I couldn’t understand how the author herself couldn’t have noticed, it led to a lot of frustration on my part. This is an issue I’ve had with every book in the series, so why did I bother to keep reading you ask? Well, while elements frustrated me I was also impressed by the author’s ability to set a dark mood with the use of eerie backdrops like abandoned amusement parks and graveyards, I love that gothic style imagery and Fitzpatrick has a knack for it. Her dialogue also has a great sarcastic tone at points especially when it comes to the main love interest, Patch. Unfortunately, I felt both of these things were severely lacking in her final novel Finale, which meant there wasn’t one positive thing I could grab onto and enjoy. It’s a shame because as the final book in the series I was hoping Finale would deliver on these points in a way that was even better and more intense than its predecessors, but instead the opposite occurred, the settings and dialogue became bland. Even the ‘plot twist’ was startlingly obvious, and the author had previously been good with those. Taking this into consideration, I can forgive bad writing if there’s a riveting plot or interesting characters to grab onto, but there wasn’t.

The worst aspect of Finale was the plot, it didn’t seem to go anywhere. Instead of looking forward to reading my book at the end of the day I found myself disillusioned at the prospect because it was that much of a chore. I must admit when I finished the previous book in the series, Silence and learnt that Nora would become the leader of the nephilim I nearly choked on my tea. That girl can barely look after herself let alone lead an army! Safe to say I was expecting a train wreck. The train wreck did appear, but not in the capacity that I was expecting. Instead it took the form of pure boredom! The final book was supposed to be when the fallen angel and nephilim conflict was set to burst. I was expecting some serious action to go down but the book barely focused on the war at all, just the peripheral vision. Throughout the entire novel the characters had endless discussions about how they needed to get ready for the war, and yet they never did. They talked and talked but nothing happened, and in the end Nora’s role as leader was almost entirely irrelevant, which was irritating when the majority of the novel had focused on her receiving Rocky style training lessons to increase her strength and endurance to prepare her (scenes which were also incredibly boring). Nothing significant actually kicked off until page 399. THIS IS THE FINAL BOOK IN THE SERIES AND YOU’RE WAITING UNTIL THERE ARE ONLY 65 PAGES LEFT BEFORE ANY SERIOUS SHIT GOES DOWN? ARE YOU SERIOUS?! When the fighting did actually start it felt rushed and was over almost as quickly as it started. Four, 400-ish page books have culminated in a battle that barely even began.

Then there was the annoying subplot going on about devilcraft, a drug like substance that could make nephilim stronger but naturally, had side effects. The characters had a lot of debates about whether they should use it, if it was safe and whether it could be used to their advantage but I found its introduction to the plot boring, annoying and incredibly unoriginal. It seemed to be there simply to pad out the novel, time which could have been spent better dealing with the ongoing war and making it more interesting.

There were a couple of surprises in Finale I wasn’t expecting and Fitzpatrick did deal me an emotional whammy right at the end that brought a tear to my eye, but I was so fed up by that point that it couldn’t make up for the rest of the novel. I think if this series had remained a trilogy it could have been a lot better and far more action packed.

The character development in this novel felt weak-willed. The only person who undergoes any kind of transformation is Nora, who attempts to go from a helpless victim who always gets in the way, to a slightly less helpless victim who always gets in the way. I have a feeling her storyline was supposed to be empowering in this book, she makes steps to try to make herself more competent and refuses to let others coddle her quite as much but honestly, I just couldn’t take any of it seriously because even when Nora was trying to be strong she was really awful at it. Not to mention she moaned and complained every step of the way. She kept giving all these speeches about how capable she was which was ironic because she managed to get herself in trouble repeatedly in this novel and others kept having to come to her rescue. She did get out of a few situations by herself but the ratio wasn’t looking too good.
And then there’s Patch. Oh dear god WHAT was going with Patch in this novel? He’s always been a controlling maniac but he also managed to be vaguely sexy and entertaining while doing it. In this one though he was plain creepy. For some reason in this installment Patch felt the need to always quell Nora’s fear of impending danger by saying firmly ‘you’re mine, angel’ followed by something along the lines of, ‘no one would dare hurt you, or I would rip them apart’ etc., etc. I could let the author off if she said it one or two times, but when you start encountering the phrase ‘you’re mine’ in every conversation it begins to feel incredibly uncomfortable and possessive. I wish I had counted because I’m sure it appeared at least 15 times, which is also a bad sign of repetitive writing.

The secondary characters were slightly better although no more rounded. Vee and Scott provided the occasional fun one liners but didn’t really have any purpose other than acting as springboards to move the story along. Dante seemed like a pointless, unneeded addition to the cast who I never truly got to know or care about. And don’t even kept me started on Pepper Friber’s mess of a character. Oy.

In all fairness with my track record when it comes to this series I shouldn’t even have bothered reading past the first book, maybe if I hadn’t already owned all the novels I wouldn’t have bothered. However, there were certain elements of the story I did want resolved so I guess from that point of view Fitzpatrick did do a few things right. I always had the hope that this series would get better, but Finale was the worst book of the lot with bad writing, poor plotting and irritating characters which has led to me feeling as if I have utterly wasted my time with this series. Still, at least it’s a relief to have finally finished it!

Writing Style: 1/5
Originality: 1/5
Entertainment: 2/5
Character Development: 1/5
Would I recommend this book? Are you joking?