Overall Impression: A beautiful, deeply moving book about the best and worst humanity has to offer. 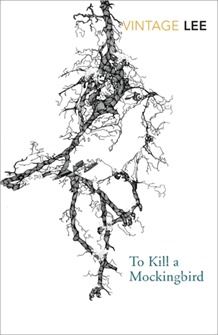 How strange is it that I decided To Kill a Mockingbird was going to be my next read only a few days before everybody was in uproar about Michael Gove axing it from the UK English curriculum? Could there have been a more perfect time for me to start reading this, when everyone is feeling so passionate about it?
To Kill a Mockingbird has always been one of those novels I felt everyone except me had read. I wasn’t given the option to study it at school and for years and years people’s pop culture references about Atticus, Scout and Boo Radley were utterly lost on me. Before diving in all I knew about Lee’s famous tale was that it was set in the south and tackled the topic of racism, but this novel has so much more to offer than that.
This book was also read as part of The Rory Gilmore Challenge.

‘Shoot all the bluejays you want, if you can hit ‘em, but remember it’s a sin to kill a mockingbird.’
Atticus Finch gives this advice to his children as he defends the real mockingbird of this classic novel – a black man charged with attacking a white girl. Through the eyes of Scout and Jem Finch, Lee explores the issues of race and class in the Deep South of the 1930s with compassion and humour. She also creates one of the great heroes of literature in their father, whose lone struggle for justice pricks the conscience of a town steeped in prejudice and hypocrisy.

When I reach for words to describe Lee’s writing style I keep coming back to the same one over and over again, beautiful. This book was a pleasure to read, it flows wonderfully; as if writing were as easy as breathing. Lee’s prose ebbed and flowed from one line to another seamlessly. When I try to put it into words all I can compare it to is being rocked smoothly in a boat or falling asleep to the rhythm of a train. Her style was calming and comforting, yet Lee’s power was not only in what she said, but also in what she didn’t say. Lee’s crisp imagery presents a believable picture of small town life, the characters loved to gossip and picked out the slightest discrepancy yet showed resilience in a crisis, banding together to look after their own. I could picture every setting so clearly, the Radleys’ front porch, the courthouse, the magical notch in the tree.

This is an accessible novel as classics go, it’s use of language is straight forward never becoming long-winded or overindulgent. It does use southern dialect but it’s easy to understand and I fell into the rhythm of it quickly. I found myself marking page after page because of a beautiful description or quote. I soon realised that if I marked everything I wanted to I wouldn’t finish the book until Christmas and had to admit defeat!

I viewed this novel as having two distinct sections, the first half follows a young girl named Scout, her brother, Jem and their friend, Dill who become obsessed with Boo Radley, a mysterious recluse who lives down the street. The children get bored during the summer months and begin to come up with schemes that will make Boo come out of his house. The second half of the novel deals with a court case Scout’s father, Atticus is working on in which he defends a black man named Tom against a rape charge, sending the town into uproar. Come to think of it when you describe the basics it doesn’t sound all that exciting, but trust me, it is.

This novel is a real grower, while I was interested from the beginning I found it slow moving at first and had difficultly reading more than one or two chapters at a time. Scout and Jem’s antics were fun and I enjoyed learning about their lives but the story didn’t seem to be rooted in any kind of central plot, which made me feel like I was wandering around without much purpose. However, I slowly became more fascinated by the Radley mystery and once I hit the second half dealing with the court case I couldn’t stop reading, I continued right though to the end of the book finishing it at 5am. I had this persistent feeling that I couldn’t put it down until I finished it, as if the story was so important that I had to sit there and follow it though to the very end. After I did finish it I couldn’t go to sleep, I just sat there thinking for another hour while the sky outside grew lighter.

Lee’s tale is set during the 1930s, post American civil war but pre the peak of the civil rights movement and in the midst of the great depression where money was scarce and tensions were high. The whole town is still heavily prejudiced so the idea of Scout’s father representing a black man and believing his story over the word of a white family evokes a severe reaction. This allowed for some brilliant social commentary about fear, human nature and the justice system. It also dealt with classism, sexism and the failings of the education system. I often found myself clenching my fists in anger or tearing up at the unfairness of it all, sometimes both at once. One scene in particular in which a teacher taught the children about Hitler and how persecution was morally wrong showed a complete blindness to the reality of how some of their own community were acting and left me enraged. No matter how old I get I don’t seem to become desensitized towards the persecution of others and I’m glad of that, the alternative is a scary thought.

Having said this, To Kill a Mockingbird is also a surprisingly uplifting novel considering its subject matter and often made me smile and laugh out loud. As the book is narrated from a child’s point of view (while also occasionally dipping into adult knowledge that allows for hindsight) everything is looked at with an element of naivety and innocence. Scout still believes that people are inherently good and has a childish wonder when she looks at the world, unaware of many social norms. Therefore her straight forward questions often stumped the adults and made them think about the world they lived in. It added a great layer to the book.

I fell in love with all the key characters in this novel, but even the minor ones were fleshed out, often showing that first impressions were not always as they seemed. Scout was brilliant, at first I actually thought she was a boy because she was so boisterous and forthright. Later I realised this was intentional because the other characters often commented on how Scout’s behaviour was unseemly for a female. She was so sassy and vibrant, many of her remarks made me laugh and I respected how she held her own with the boys. I will never forget her hilarious ham outfit for the school pageant. I always have a soft spot for characters who subvert their societal roles and Scout definitely fits into that category. But it also made me sad, I worried about what would happen when she grew up and whether she would be forced to change and become a ‘respectable’ lady. Jem, Scout’s older brother while not as likable still made for an interesting read. Because he was older the novel essentially showed the corruption of his innocence and I found it fascinating to see how his perception of the world changed and how he dealt with it.

Boo Radley was of course, fascinating and I still find my thoughts wandering back to him occasionally. I won’t say too much about him though for fear of giving things away for those who haven’t read the book.
However, my final comment must be for Scout’s father, Atticus Finch. What a remarkable man. How could you ever sum up his moral conviction, his quiet strength, his wisdom and faith in the human race even when it is capable of such horrendous deeds. He’s the lynch pin in this novel who keeps everyone on the right path and prevents them from becoming bitter. He is truly one of the most wonderful characters in literature I’ve ever come across.

I could never do this book justice, not in a million years, but I hope from this review you can tell that it’s pretty darn awesome. I couldn’t pick out even one minor fault, it’s got to be as close as you can get to perfection and it’s jumped straight onto my favourites pile. If you haven’t already read this book! Or maybe even reread it. I’m sure this is one where you get something different out of it with each reading and I hope I will be able to return to it again at some point in my lifetime. I would recommend this novel to anyone male or female 12+ who is interested in American history (but doesn’t want to be bludgeoned over the head with it), the horrors of prejudice and the quiet strength of the human soul.