Hello all! It’s that book haul time again. You know, where I begin to hyperventilate and go completely bonkers at the sight of pretty inanimate objects.
I have to say, I think I’ve been doing pretty well on the book buying front lately, while I gave up on my naïve attempt at a book ban a while back (which everyone but me knew wasn’t going to work) I’ve still been trying to restrain myself when it comes to my bookish whims. After all, if I had my way I would buy the ENTIRE store, and my TBR pile is nearing 200. Although actually now I think about it, due to my latest escapades it’s probably over that now…whoops.
However, a couple of weeks ago my second year university results came though. I discovered that I had passed everything with flying colours, including my soul sucking statistics course which was the biggie because it’s the only module everyone has to pass in order to go onto to their third year, and it was my one weak spot. Safe to say, it was a big relief! So of course, I chose to treat myself by buying a tonne of books I had been lusting after.
So, onto the bookish goodness. 😀 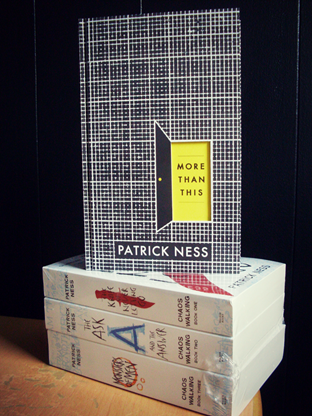 My first sign of weakness was purchasing all things Patrick Ness, which was maybe a little premature seeing as I haven’t even read A Monster Calls yet and for all I know I could dislike his writing. But I doubt it. I have a good feeling about this author, I can’t quite explain why. His Chaos Walking Trilogy which begins with The Knife of Never Letting Go has been recommended to me by numerous bloggers who’s opinions I trust, so I snapped it up when I saw the lot for under £7. The trilogy’s a YA dystopian and the characters live in a town where everyone can hear each others thoughts. That’s essentially all I know but it sounds like a cool concept and I’m really into my dystopian right now. Because I’ve been pacing the amount of books I read in this genre, I haven’t got sick of it yet unlike so many other people! The second book More than This I bought, if I’m honest, purely for the cover. I LOVE IT SO MUCH. With the black and the white with the stark neon yellow contrast. GIMMIE. I’m a big fan of simplistic covers that make an impact. Add in the fact that it’s a hardback and I was a gonner, I snapped it up for a cheeky £5. The novel is about a boy who distinctly remembers drowning, but finds himself very much alive. It sounds odd and I have no idea what to expect. Will it live up to the cover? I hope so. 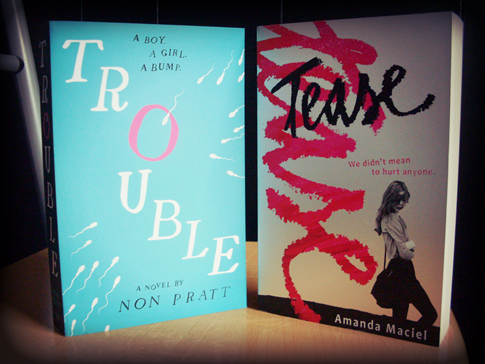 Next up, two new 2014 releases I’m really excited about! They’re rejected review copies I picked up from my favourite second hand bookshop for under £3 each. Both were on my wishlist so I couldn’t believe my luck! Trouble by Non Pratt is a tale of teenage pregnancy but with a twist because a new boy at school offers to pretend to be the baby’s father. Way to hook a reader. As soon as I read the blurb I wanted to know WHY a boy so young who didn’t know anybody at his school would want do such a thing that would make him the target of so much controversy. I’ve heard so many positive things about this book so I can’t wait to read it. 😀
Tease by Amanda Maciel also popped onto my radar shortly after it’s release due to it’s brave concept. It follows a girl who is legally charged for bullying someone because her victim commits suicide. I’ve never read a novel where the topic of bullying is at the forefront, I guess I had never come across one that piqued my interest enough. Tease however, sounds like a fascinating read full of moral dilemma’s and I like the idea of it being from the bully’s perspective. Can anyone ever be held responsible for someone else’s suicide when the act itself is carried out by the individual? How much accountability should a bully be held to? Bullying is a cruel thing, and I’m hoping this novel with touch on the topic in a respectful, thought provoking way. From a psychology student point of view it sounds brilliant, especially taking in account the element of bystander bias.

These two appealed to the fantasy side of my brain. I first spotted The Shambling Guide to New York City by Mur Lafferty when the publisher Orbit Books featured it on their site. I was drawn to it instantly, the bright colours, the comic book illustration style and of course, the quote on the front cover that compared it to Buffy. Add in the bonus of it following a travel writer creating a guide to New York City for the undead and I was sold. Maybe I’m a sucker for advertising but it sounds right up my alley and in theory, has all the elements to make me fall in love with it!

Throne of Glass has been popping up on my Goodreads feed for a while now and it caught my attention because of Niki’s awesome reviews and its kick-ass front cover. Seriously, LOOK HOW FIERCE THIS GIRL’S FACE IS. I LOVE IT. Add in the swagger walk, ripped clothing and serious hair swish she has going on and I had to have it! I’m such a sucker for strong female protagonists with sass, seriously, I have a problem. This book is the first in a trilogy that follows a female assassin in a fantasy world. I feel like I can totally justify buying this book because I haven’t read anything assassin related in a while, and everyone needs at least one assassin in their life, right?

Next up we have The 5th Wave by Rick Yancey and The Diviners by Libba Bray. Again I got both of these for under £3 which is practically criminal for such pretty hardbacks but hey, it’s my gain! The Diviners was a bit of a punt on my part, I’d seen it floating around the internet and I vaguely remembered Notes in the Margin reviewing it, but mostly it drew me in because of its 1920s setting. It’s an era I’ve become quite interested in since reading The Great Gatsby and I was curious to see what a YA fantasy author would do with it. Fingers crossed!
The 5th Wave however was pure impulse, I saw it and I wanted it. I remember Goodreads going crazy over it when it was released and now it’s being turned into a movie. It’s got aliens, it’s got dystopia and it’s got apocalyptic shenanigans, should be good stuff. 🙂 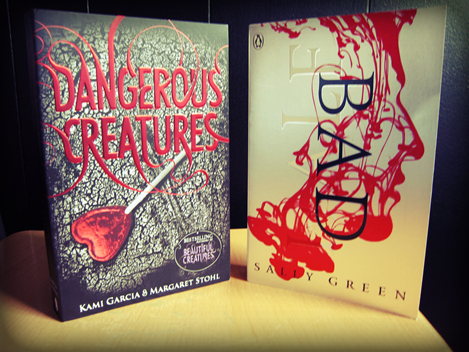 Then we have two witchy, YA books, again, courtesy of the second hand bookshop. Dangerous Creatures by Kami Garcia and Margaret Stohl is the first book in a spin of series set in the same world as the Caster Chronicles. It follows Ridley, a dark Caster and siren prone to mischief. Initially, I wasn’t sure if I was going to try this spin off, especially as I was only half way though the Caster Chronicles but when I saw it so cheap I could hardly resist! So far the authors have had a knack for setting an atmosphere that keeps me coming back for more so I hope that this will the case with this new series.
Half Bad by Sally Green however, I don’t know much about, except that it has witches and has been hyped within an inch of its life. I’m looking forward to adding my own two cents.

Finally we have The Universe Versus Alex Woods by Gavin Extence. Again this hardback was THREE POUNDS. I don’t understand this. Why are retails underestimating the value of gorgeous hardbacks? Is there something I don’t know?
I saw this one reviewed by the lovely Miscrawl and I was kind of on the fence about it, however, as soon as I saw the price I yelled ‘MINE’ possessively and added it to my basket because honestly, isn’t it beautiful with the weird grass and hollywood sign-esk typography? It follows a teenage boy who befriends a widower and somehow as a result ends up being pulled aside at customs with a bunch of drugs and an urn full of ashes. As you do! It sounds bizarre and quirky, and I’m quite into bizarre and quirky at the moment.

The lesson of this post? Bloggers, you must stop recommending awesome books to me, I’m inundated and have no impulse control!!! It’s really the equivalent of animal cruelty when you think about it. You keep feeding me books so I eat them, and if we’re not careful I’m going to be one overstuffed kitten. Yeah okay… that analogy just got weird.

Safe to say I think we’ve all acknowledged that I am not to be trusted with the books, or the book catalogues, or access to public transport which has the potential to get me to where the books live…
Have you been on any book splurges lately? Read any of the books above? What are you looking forward to reading most this July? 🙂

46 thoughts on “The Hills are Alive…With the Sound of my Bookcase Creaking.”