Overall Impression: Smart, hilarious and packed to the brim with emotion. I’m wrapped up in a feels blanket and I don’t ever want to come out!!! (Please don’t make me.) 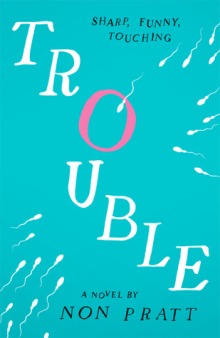 From the first moment I saw this novel, everything about it seemed to call to me; the bright blue pastel cover, the teen pregnancy subject matter and the mysterious blurb with its tantalising hook. As it turned out, Trouble not only met my expectations but succeeded them more than I could have ever predicted. It’s given me the worst book hangover since The Hunger Games, I couldn’t pick up another book for weeks! I’m a bit scared to review it if I’m honest and I’ve kind of been avoiding it because I don’t know how I can do it justice! I’ve written and rewritten this review endlessly because I have too many feelings and I want it to be right. It still isn’t right, but here goes nothing!

Hannah is smart and funny.
She’s also fifteen and pregnant.
Aaron is the new boy at school.
He doesn’t want to attract attention.
So why does Aaron offer to be the pretend dad to Hannah’s unborn baby?

Trouble is a dual perspective book that switches between the point of view of Hannah, a girl more interested in partying and the opposite sex than focusing on her GCSEs, and Aaron, the quiet new boy in school who just wants to keep his head down and pass by unnoticed. Coincidentally, I’ve been reading a lot of multiple perspective books lately but none have been as smart, snappy or compelling as Trouble. The POV alternates almost every page which not only means you quickly root for each character individually, but you also get to see how their impressions of each other change as events unravel. Both voices felt distinct and different which meant I didn’t find myself impatient to return to a favourite. Additionally, since Trouble doesn’t really have chapters it has an almost addictive quality where you fall into the trap of saying ‘just one more page’ before devouring the book for another two hours, it’s absolutely brilliant.
Pratt is an incredibly witty writer with a sharp sense of humour and a flair for sarcasm, but also has a gritty, tell all approach. She’s not one to shy away from swearing or innuendo, yet she’s also bold and eerily insightful with a knack for pulling at your heart strings and then yanking them out completely. At points Trouble left me an emotional mess! There were so many ups and downs that sometimes I found myself crying and snorting with laughter all at once. I should probably note that this novel is very British which could be a barrier to some. But for me, it made the novel feel all the more realistic, especially the depiction of school!

It’s safe to say the plot of Trouble had me hooked from the beginning. I read it in TWO DAYS. Becky doesn’t read books in two days, it just doesn’t happen! But this novel made me a woman possessed; I began it mid day on a Thursday and didn’t let go of it until 5am on Friday (except for the essentials like eating and peeing). After closing the last page I spent half an hour smiling at my ceiling like a lunatic replaying the story over and over in my head because I was too amped up on feels to sleep. Trouble poses key questions throughout the narrative that propel you through the story at immense speed. How did Hannah get into so much trouble? Who is the baby’s real father? Why is a fake baby daddy needed? Why did Aaron the new boy at school volunteer his services? The need to know only intensifies the more invested you become in the characters. At times Pratt gets tantalising close to giving you the answers, and then rips them away again with what probably constitutes a look of glee on her face. The story only got more riveting as it went on and took twists and turns that left me reeling.

Non Pratt tackles a wide array of controversial issues in this novel, underage sex, teen pregnancy and the importance of consent to name a few. As you can probably tell from the front cover, this book is up front and doesn’t sugar coat anything. It’s one of the most honest stories I’ve ever read yet it still remains uplifting and laugh out loud entertaining throughout. What’s truly remarkable is that it doesn’t at any point feel like an ‘issue’ book. I went into Trouble expecting to be hit over the head with teen pregnancy drama and possibly a few condescending morals but what I got couldn’t have been further from it. Trouble doesn’t seem like a teenage pregnancy book because the emphasis is placed elsewhere, on Hannah’s teenage woes, her relationship with her family and how it shifts, her heartwarming friendship with the new boy at school, her epiphanies about who her true friends are and the discovery of her self worth. There is the occasional offhand reference to pregnancy symptoms and while much of the conflict in Hannah’s life stems from her predicament, her situation does not define her. She breaks the stereotype we have in our heads of how a teen like Hannah would act. If I had to summarise what this book was about teen pregnancy wouldn’t be my first thought, it’s so much more about friendship, family, forgiveness and self empowerment.

Even taking into consideration the brilliant, snarky writing and compelling plot, it’s the characters that truly make Trouble shine. Hannah is a fierce protagonist with a never-ending amount of sass. At first I was worried I wouldn’t like her because she didn’t appear to treat herself or others with much respect and made a lot of cringe worthy comments and decisions (although it was nice to have a YA protag that wasn’t totally innocent for once). Let’s just say that she’s the kind of girl I would have avoided in school and looked at with a level of disdain (perhaps unfairly). However, I was soon completely sucked into Hannah’s life and the further I got into the story the more her ballsy exterior was peeled back to reveal a caring, smart and strong teen. Hannah has to deal with slut shaming, taunting at school and the cold shoulder from her parents all the while coming to terms with the idea of becoming a young mother, yet she makes every step with her head held high, confident and self-assured with the decisions she makes even though she is scared of where they will take her. It was so inspiring.

Aaron, the second protagonist in Trouble was equally hilarious and fascinating. As the new guy, he looks at the school from an outsiders perspective and is highly disparaging and resistant to the degrading school hierarchy. He’s reluctant to make new friends and the highlight of his week is spending time at an ‘old folks home’ talking to a rude, short-tempered old man. He seems to have insight beyond his years and soon picks up on things about Hannah that the others may have missed. Although it seems to go against everything he is trying to achieve, Aaron decides to help Hannah through her turmoil almost becoming her protector. As implausible as it sounds, the relationship works and is entirely believable. Aaron soon becomes a deep and complex character with so much hidden pain from his past that the reader can slowly unpick. Seeing the intense relationship between Hannah and Aaron grow was one of the best aspects of this novel, and I loved that although there was chemistry and flirtatious banter it was about their friendship first and foremost.

There’s some great minor characters in Trouble too, Katie, Hannah’s rebel best friend who is forever concerned with her reputation and looks, Jay, Hannah’s perfect step-brother who stands as a reminder of her own short-comings and even Hannah’s mum who works at a family planning clinic. (I know, awks right?)

I feel like this review is painfully inadequate at expressing how mesmerising this book is, (especially as I tried so hard to avoid spoilers) but all I can do is hope it’s piqued your interest enough for you to check it out! Trouble is one of the best books I’ve read all year and if I could only describe it in one word I would probably pick unconventional. It looks at controversial topics face on making you laugh the entire way though, it challenges your beliefs, but ultimately, it’s a book with immense heart and I feel like anyone who doesn’t read it will be missing out. I would recommend it to EVERYONE 15+. Please pick it up IMMEDIATELY.
Yours Sincerely, Becky.

P.S. If you want to find out more, I wrote a spoiler free guest post for a feature sending Hannah and Aaron on a dream bookish date here!