Hello peeps. 🙂 This blog post is wayyyyy overdue, you have no idea how long I’ve wanted to write it! Divergent, Catching Fire and The Hobbit: The Desolation of Smaug were all films I was insanely excited to see when they first came out. I counted down the months, weeks and then days until their release and ran into the cinema flailing my arms with the enthusiasm only a true fangirl could muster. Afterwards, I had so many thoughts that I wanted to write about but it never happened because the films were all released during semesters when I was struggling to find blogging time. However, I don’t want to let the films pass by completely without acknowledging their existence because I was SO excited to see them, yet I don’t really feel they warrant individual blogs. So instead (taking inspiration from Emma’s lovely posts) I thought I would write some mini-reviews as a way of summarising my thoughts. 🙂

So first up we have Divergent, but before we get started can I just take a moment to say how annoying I find this movie poster? The background is cool and atmospheric but what the heck is up with the actors’ body positions? They’ve gone to painfully obvious lengths to show off both Shailene Woodley’s boobs and butt in one shot because WOMEN ARE OBVIOUSLY ONLY THERE TO BE A PIECE OF MEAT. I mean, it looks like they’re standing on Pride Rock and Woodley is using her co-star’s shoulder as a butt rest.

Anyway, onto the review! Although I adored Veronica Roth’s dystopian novel about a world divided into 5 different factions, I was quite nervous before seeing Divergent; the poster, the trailer, the casting choices, none of them really impressed me. I had found Woodley annoying in most of her pre-movie interviews and the sets didn’t look how I had imagined them in my head. Once the lights dimmed however I quickly found myself drawn in. Woodley’s performance was impressive – her strength, her vulnerability, the way she portrayed the complex emotions of Tris’s character. Theo James as the love interest Four was brilliant, he completely inhabited everything I imagined his character to be (his intimidating strength and of course, imposing good looks). The chemistry between the two was palpable! The train jumping scenes were epic and I could feel my heart pumping in some of the more hardcore initiation sections where Tris had to prove her worth in a faction defined by bravery. I was surprised by how well the serum scenes turned out as well (where characters had to face their worst fears in their head). They managed to make them realistic when they could have easily become silly.

One scene in Divergent that particularly stuck with me – Tris and Four were trying to jump onto a fast moving train. Four offered his hand to Tris in aid and she said ‘I’ve got it.’ and Four said ‘I know you do’. It produced such a fuzzy feeling within me because it shows how far our portrayals of YA romantic relationships have come. Four respects Tris, trusts in her strength and acknowledges that she can look after herself, but at the same time wants her to know that he is there to support her if she needs it. I thought it was such a beautiful moment!

Now for a couple of things I didn’t like about Divergent. Firstly, the soundtrack! There was so much Ellie Goulding, and I HATE Ellie Goulding! Plus, because she’s such a well-known artist I felt the songs distracted me from the film. Secondly, while the baddies get decent screen time I would have liked to see more of the initiates. Also, I felt some of the scenes they ditched from the book could have amped up the stakes for the protagonists. Finally, I just felt there was something missing overall. Divergent didn’t leave me awe-struck, but it was a fun ride. 🙂 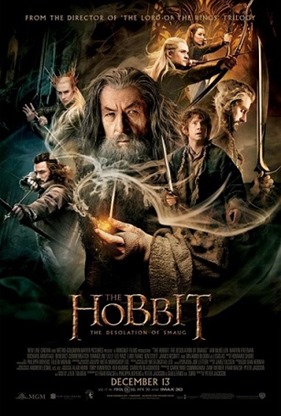 Next up we have The Hobbit: The Desolation of Smaug, aka, part 2 or 3. *Sigh.* I’m sure you all remember how amped up I was after the first installment. The Hobbit is one of my favourite books and with the first film I was so overwhelmed by the fact that I was ACTUALLY GOING TO SEE TOLKIEN STUFF IN THE CINEMA (I was too young when the Lotr films came out) that I was able to overlook a lot of flaws that became more apparent in the second installment. As horrified as I am to admit it, I exited the cinema feeling really underwhelmed with this one which is odd, because a lot of people liked this second film better. There was a lot more action in part 2 and the pacing was generally better because we start to get into the meat of the story, Beorn appears, the spiders attack, there’s elvish action, we get to see LAKETOWN (a fictional place I love) and we finally face off with Smaug the dragon. I also finally got to see the scene I was most looking forward to, the barrel escape! My heart swelled watching that, it was so fun and perfect, exactly how I imagined it and I never thought I’d get to see it on the big screen. 😀 A couple of other scenes also stood out to me, I loved the conversation between Tauriel the elf and Kili the dwarf about starlight, all the scenes with Bard were brill, Smaug looked phenomenal too. So, what’s the problem you ask?

Wellllll, maybe this is going to make me sound like an annoying fuddy duddy bookworm that’s all about the original material, but I was upset that Bilbo STILL wasn’t taking centre stage. The film focuses too much on the external events of Middle-earth. Jackson tries so hard to link the The Hobbit to The Lord of the Rings it’s painful. The scenes with Gandalf were boring and unneeded, the elves while cool weren’t really necessary and the face off with Smaug was so long that I actually zoned out, and you’re talking to a girl who loves freakin’ dragons!!!! I get that they were probably trying to justify the 270ish minutes of running time leading up to Smaug but it was so overindulgent and off base. It says a lot that when I think of the film, I struggle to think of scenes with Bilbo – I think dragon, elves, dwarves, even Stephen Fry! But not Bilbo. Where’s the quaint and heartfelt story of an admirable hobbit who stumbles into a role too big for his boots? I feel like it all got stripped away with the big budget production. 😦

When I first watched Desolation of Smaug I was really disappointed (maybe I wasn’t in the right mood who knows) but when I re-watched it later I enjoyed it more so for now I’ll rate it somewhere in the middle.

Finally we have Catching Fire, and even though it’s nearly a year later I’m still trying to find a way of writing this review that doesn’t just sound like:

Just thinking about it makes me feel all:

(This seems to have somehow become New Girl themed, I don’t know how that happened.)

Ohh dear lordy. Catching Fire met all my expectations and so much more. If it’s possible, it might even have been better than the first film, AND WHO THOUGHT THEY COULD TOP THAT?!?

Everything about Catching Fire was mesmerising. The CGI, the sets, the acting. I loved that the film started off slowly back in bleak District 12 and how the pressure slowly grew with the arrival of the Peacemakers and the Victors Tour before we were thrust back into the arena. There’s something so satisfying about a plot that slowly builds to an explosive conclusion. I came out of the cinema feeling slightly traumatised by the ending, even though I knew how it was going to turn out!

Once again all the actors outdid themselves. Jennifer as Katniss was fabulous, I felt her every emotion as she went through the aftermath of the games and the turmoil of the political shenanigans (she also had some great funnies like the elevator scene). Peeta was ever the selfless, steadfast rock inspiring hope in others. The chemistry between the two was electric. I literally wanted to melt into a puddle of emotions when THE beach scene came on and Peeta was all ‘nobody needs me’ and Katniss was like ‘I NEED YOU’.

I love, love, love how the relationship between these two has evolved throughout the films instead of staying static. It’s the satisfaction of that slow build again. Equally I liked that we got to see more of how Gale, Prim and Effie will continue to grow into the people they are supposed to be. It was great to see more of Haymitch as his layers of alcoholism and anger were stripped back. Equally the victors who were put back into the games were exactly how I pictured them, especially Finnick, (the heart melter) Johanna (the sass monster) and Beetee (the eccentric genius).

Literally the only negative thing I have to say about Catching Fire is that the peacekeeper outfits made me think of a daft punk music video (which makes it kinda hard to take them seriously sometimes). Someone please tell me this is not just my crazy brain?!?

I laughed, I cried. It was brilliant. Guys, Mockingjay is going to wreck me.

Okay so this turned out to be a pretty long post, but you guys know that I’m incapable of summing up my thoughts in one paragraph! When I say mini reviews, I guess they’re mini reviews by my standards, LOL. But still, I’m glad that I’ll be able to look back at this post years from now and remember how these films made me feel. 🙂

Did you guys see these adaptations? Did any of them disappoint you? Which adaptations are you most looking forward to at the moment? Personally, I can’t wait for The Maze Runner, I just finished the book and it seems like it was made for the big screen!

39 thoughts on “Mini Film Reviews: Divergent, Catching Fire and The Hobbit: The Desolation of Smaug”