Having recently read and enjoyed the fast paced dystopian adventure that was The Maze Runner, I was looking forward to the release of it’s film adaptation with impatient enthusiasm (and secretly scowling jealously at the American bloggers who were able to see it earlier than the UK). So a couple of weeks ago I snoozed through my early lectures, met my friend and we raced for the train, just managing to catch it in time to allow us to make the midday showing with an overflowing bucket of popcorn. So, did The Maze Runner live up to my expectations? Hmm….well… *puffs out cheeks with air* yes, but it wasn’t quite what I was expecting.
Side Note: I’ve tried to write this so it will make sense to people who both have and haven’t read the book but I will, inevitably be making a few comparisons. 🙂

The Plot
Yeah, I’m lazy so I’m totally going to nick the bookish blurb I already created for the book:

When Thomas (Dylan O’Brien) awakes and is welcomed into a glade consisting entirely of boys he has no memory of his life, his family or the world outside. When he tries to reach for answers all he finds is fuzzy faces and fragmented conversations, although he has the strange sensation he has been in the glade before. The boys have created a mini-society and to survive, order is vital. Everyone has their place – as butchers, cleaners but most importantly runners who go out each day to search the maze that surrounds the Glade, keeping them trapped. Every day the runners risk their lives looking for salvation and must make it back to camp by nightfall before the walls to the Glade close, leaving the runners trapped with ferocious, blood thirsty creatures named Grievers. Yet against all logic Thomas knows one thing, he wants and needs to be a runner with every fiber of his being, and he’s determined to find a way out of the maze once and for all.

The Verdict
The Maze Runner was gripping from the very first scene. As soon as Thomas is propelled into the Glade, a patch of grass surrounded by and immense and ever-changing maze, the watcher is bombarded with compelling questions. Why is Thomas there? Who put him there? Why can’t he remember anything? The first half of the film is a muddle of intrigue and confusion as Thomas learns to function and understand his new environment. Although it felt a little info dumpish at points, I ultimately think the film does a great job of orienting the watcher in such a short space of time.

The scenery and CGI made the film feel so atmospheric – the immense claustrophobic walls surrounding the boys from every side, the odd homely farm feel of the Glade where the boys had created their home, and of course, the eerie isolated feel inside the maze which I found absolutely fascinating! All my favourite parts of the film were when the characters were searching it, running from danger or looking for a way out. I often found myself diving left and right in my sticky cinema seat as if I were trying to run fast around the corners with Thomas. I couldn’t believe how real and well thought out it was, all the sections of the maze had their own quirks and were visually different, some sections even moved in different ways as well. I loved the attention to detail and it really captured my imagination, often I would find myself repeating the word ‘awesome’ under my breath in some of the particular gripping action scenes. I also think the effects team did a decent job with the monsters named Grievers based on the elusive descriptions from the book. While they weren’t as terrifying they were well thought out and impressive! 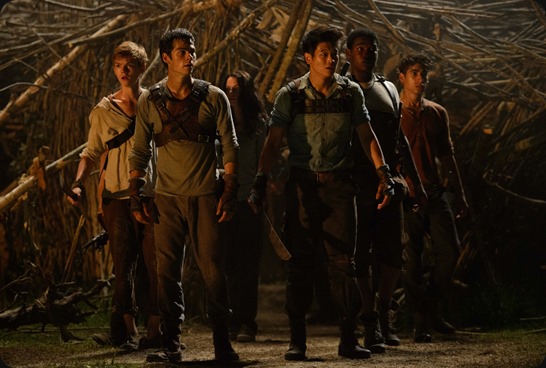 I must admit having read the book so close to seeing the movie I did feel like I was getting a bit of whiplash. The film had some MAJOR plot changes which really confused my brain and I wasn’t totally sure how to feel about them. Some big, important things were left out and some entirely new plot points were put in, some of which seemed like sneaky shortcuts (like the awkward introduction of the antidote serums). I tried to keep my bookworm brain in check and repeat my mantra that ‘books and films are separate’ but at times it did honestly feel like I was watching an entirely different story with the same concept. However, the movie did also add in some cool additional touches that weren’t in the book. I liked the idea of the wall where the boys carved their names – to me it reflected an innate need for the Gladers to mark their existence, and it also acted as a practical way of remembering everyone who had entered the Glade. Ultimately, the plot was fun and entertaining even with the changes and if I rewatch the film in six months time, I’ll probably be less critical of it because the book won’t be so fresh in my mind! 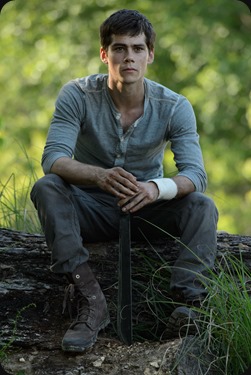 I was somewhat disappointed with the acting in The Maze Runner. Initially Dylan O’Brien seemed like a perfect casting pick for Thomas, the unassuming, approachable hero of the tale, and well, it helps that he’s pretty easy on the eyes too. 😉 However, as much as I enjoyed getting to stare at his lovely face for 2-ish hours I was underwhelmed by his performance. I’m not sure why because he didn’t do anything in particular that stood out to me but I never warmed to his character. I felt like he was lacking an element of sincerity in his dialogue, it was almost like I didn’t quite believe what was coming out of his mouth. His protective, friendly side seemed at odds with the more aggressive authoritative side that came out as the film progressed and I never fully became emotionally invested in his story.

Teresa, (Kaya Scodelario) the girl who arrived in the Glade and caused chaos from order also underwhelmed me, because of some of the plot changes her presence in the Glade almost seemed completely pointless. She didn’t really provide any help or knowledge that could help the boys figure out what was going on, and didn’t even have that many lines. I also didn’t feel a connection between her and Thomas at all, which was one of the most important aspects of the book! I found myself disappointed with Minho’s character (Ki Hong Lee) too, he seemed to have so much wit and presence in the novel, but in the film he just seemed to fade into the background except when he became a plot point.

Some of the secondary characters made more of an impression such as Alby (Aml Ameen) and Newt (Thomas Brodie-Sangster), but as far as the acting was concerned there was one big standout for me, Gally played by Will Poulter. His character was given so much more depth than it received in the book because they turned him into a much more sympathetic baddie. I found his thought processes and motivations for taking a dislike to Thomas and wanting to keep order in the maze impressive, and became more caught up in his storyline than the main protagonists! There was something quite magnetic and impressive about his performance. (Also, I found myself weirdly fascinated by his eyebrows, don’t think I’ve ever seen a guy with such oddly arched ones. Don’t judge me!) 😛

Ultimately, The Maze Runner was fast paced fun. It’s a movie where you can sit back, relax, and switch off your brain for a couple of hours and enjoy all the adventure and action that ensues. The sets and CGI are atmospheric, the plot fast paced and the mystery of how the Gladers will get out of the maze will keep you glued to the screen. I wouldn’t call it a must see because I found myself lacking an element of emotional investment and the story didn’t really have a lasting effect on me once I exited the cinema, but it’s well worth checking out if your into dystopia. Rating-wise I give it a tentative 4!

Have  you seen The Maze Runner yet? Did it live up to your expectations? I would love the hear what you thought! 🙂