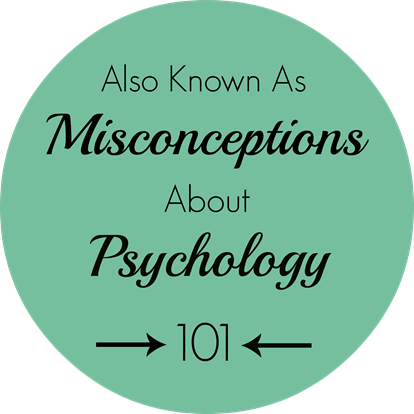 Having been a psychology student for three years now, I’ve noticed a somewhat amusing and at times frustrating trend to how people react when I tell them what I study. It’s gotten to the point where I can predict people’s responses pretty easily because the same ones pop up over and over again! The funny thing is, people’s immediate thoughts usually involve some kind of a common misconception about psychology, and other times they’re just down right ridiculous! After a recent stint of these reactions recently, I felt it was about time I vented my frustrations. It normally starts something like this:

This is by far the most popular response and oh how it gets old quickly. Yes, psychology is about the study of human behaviours, but that does not mean I have a roadmap to the inside of your head! Plus, just because I study psychology, doesn’t mean I always have my psychology hat on, a girl needs a break you know! It’s not like I’m analysing everything you do. If you tell me that you don’t like cheese, I’m not silently contemplating whether you had a traumatic cheese incident in your childhood.

After so many years of getting this response and politely saying no, I’ve gotten bored and now often answer with a resounding yes. It’s hilarious to watch people’s as the realization dawns on their face and they begin to squirm and get all paranoid, mwuhuhuuu.

This is normally closely followed by….

Why yes oh clever question maker, I see that you are currently thinking about how cute cat memes are and whether anyone noticed if you took the last slice of chocolate cake.

I CANNOT READ YOUR MIND, I AM NOT A WIZARD YOU IMBECILE. I ALSO HAVE NO RELATION TO EDWARD CULLEN.

Urrmm…. no. A psychology degree does not give you the qualifications to counsel someone professionally, I wish it did because that would be a cool added bonus as it’s a topic that interests me! This is what we would call, a common misnomer. A psychology degree would be an excellent basis to go on and specialise in counselling later if you wanted to, but specific skills, knowledge and training are needed to do that career which we don’t learn. Psychology is much more about using theories and scientific evidence to explain behaviours, and about creating your own theories, designing experiments to test them and then carrying them out (and analysing your results). Contrary to popular belief, us psychology students don’t go around asking ‘how does that make you feel?’

If I could have a new book for every time someone said this to me, I’D HAVE MY DREAM LIBRARY RIGHT NOW. Freud and his obsession with sex and childhood experiences are to put it politely, somewhat of a joke to people in psychology. He came up with theories that mostly couldn’t be proved right or wrong with scientific evidence so he could basically just make up whatever the heck he wanted to and no one would be able to dispute it. While Freud did make some contributions to the topic that led to others developing better theories, everything he said is considered by most to be absolute rubbish. Any mention of his name is usually followed by eye rolling and laughter.

Finally, last but by no means least…

This one’s a real kicker.
Sure psychology’s an easy subject, if you call reading hundreds of scientific journals, completing heavy essay based modules, analysing statistics and learning the names of the regions, sub-regions, and sub, sub, sub-regions of the brain that are LITERALLY Latin easy. And that’s just for starters! When you really get into it, it’s almost like learning a whole different language because there are so many technical terms. Some of my lecturers have been studying the subject for years and still struggle to understand many of the academic journals. I remember when I first started the subject for A Levels a lot of people chose it because they thought it was easy…ohh how they got a shock! Most of them hated it by the end of the year, unsurprisingly, I wasn’t one of them. 😉

I’m not sure why people have this misconception that psychology is easy. Because it’s such a popular topic to study? Maybe. Because a lot of people think it’s just common sense? Probably more likely. Either way, this is by far the most irritating reaction I get because a) it’s not true, and b) I WORK MY FREAKIN’ BUTT OFF.

So I just smile politely while silently screaming inside my head. 🙂

So, I hope this post was vaguely amusing! Either because it was interesting and you learnt some new things about psychology or because you were secretly chuckling to yourself about other people’s lack of knowledge about psychology!

Now I ask you dear readers, have you ever come across people that make annoying statements about a subject you’ve studied or a job that you’ve had that are total misconceptions or downright annoying? The weirder the better!

45 thoughts on “How People React When I Tell Them I’m a Psychology Student.”