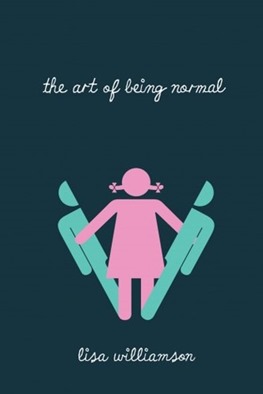 As both a reader and a psychology student, I’m always on the lookout for YA books that tackle serious topics and incorporate them into stories, whether that’s mental health, rare disorders or, in this case, gender identity. As a student, I was lucky enough to cover gender as a topic and it really opened my eyes, so I was excited to discover a novel about a transgender teen was being published this year! I couldn’t wait to see how such a complex topic would be handled, especially as it’s something people find hard to understand. This novel is groundbreaking in so many ways, and yet, unfortunately, I didn’t love it as much as I was hoping to and found myself disappointed on multiple levels.

Two boys. Two secrets.
David Piper has always been an outsider. His parents think he’s gay. The school bully thinks he’s a freak. Only his two best friends know the truth – David wants to be a girl.
On the first day at his new school Leo Denton has one goal – to be invisible. Attracting the attention of the most beautiful girl in Year 11 is definitely not part of that plan. When Leo stands up for David in a fight, an unlikely friendship forms. But things are about to get messy. Because at Eden Park School secrets have a funny habit of not staying secret for long…

Like many books being released lately, The Art of Being Normal uses a dual narrative technique, switching between the point of views of David and Leo. It reminded me a lot of Non Pratt’s novel, Trouble in the sense that the point of view switches were snappy and seamless and both voices felt unique. I have to say I preferred Leo’s voice to David’s which was a bit of an issue for me, and there was nothing particularly unique or memorable about Williamson’s writing style for me to grab on to, but despite this, I still found myself consuming this novel at a rapid pace and finished it in just three days!

I really liked how the plot of The Art of Being Normal explored what it would be like to be transgender and the issues involved. David is sure that he wants to be a girl and has known this since he was 8. He religiously keeps track of his body changing in a notebook, experiencing mounting dismay each time he goes up a shoe size or becomes taller. To him, these are signs that his body is betraying him, puberty is turning him into something he does not want to be, yet he cannot bring himself to tell his parents to do something about it. To resent and hate your own body, to be constantly acting out a role when you don’t know your lines and the battle of trying to be ‘normal’ vs accepting who you truly are must be such a difficult thing to deal with. How do you find a romantic partner that accepts you? How do you avoid being bullied by peers? How do you go about living your life in a way that makes you feel happy? Yet while I was impressed by Williamson’s discussion of this topic, I couldn’t help but want more. I guess I was hoping this novel would go into some of the darker and more serious issues such as the mental health problems (like increased depression and suicide rates) and extreme prejudice transgender people face. While there were a few scenes involving bullying, none of these emotionally impacted me or led me to feel horrified, and in general events seemed to go a bit too smoothly.

I also felt the plot of The Art of Being Normal was thin. Despite what I’ve said above about wanting this novel to delve into transgender issues further, it was also important for me that this book was able to stand in its own right, that it would be a good story with diverse characters and important issues as a bonus, and I don’t think Williamson achieved this although she tries really hard. For the first half of this novel, barely anything happened, except David talking about being transgender while Leo the mysterious new boy in school crushed on a girl, and I’ll be honest, I was bored. Then the second half of the book added in a random left-field The Fault in Our Stars type road trip mission to search for Leo’s estranged father, which felt forced to me, as if it had been stuck in because the book needed a point of conflict. I was always expecting this novel to be a character driven with David and Leo’s friendship acting as the glue that held the book together, but unfortunately even this fell short for me and I never warmed to their friendship, making the lack of plot all the more apparent.

Even with the average writing and the oddly paced plot, this wouldn’t have bothered me so much if I had really connected to or become invested in the characters. Unfortunately, this didn’t happen either. I quite liked Leo and how much of an enigma he was, as one of the only students at Eden Park School from the bad part of town, with a dysfunctional family and some serious anger management issues, he had a sort of appealing roguish personality and his mysterious past drew me it. The other main protagonist David, however, felt flat, unmemorable and passive and didn’t exude any kind of personality at all which was frustrating, because he was the main reason I picked up the book! I feel like apart from being transgender, I learnt absolutely nothing about David except for one vague allusion to him liking fashion, and subsequently, he felt one dimensional and I didn’t warm to his character. The secondary characters didn’t really leap off the page either, and I wish we could have heard more of Alicia, Felix and Essie’s reactions to ongoing events.

Overall, although the characters, writing and plot of The Art of Being Normal were distinctly average for me, I did enjoy this novel overall and whizzed through it quickly, and I still want to champion this novel for its diversity and bravery for breaking the mold. I really hope more books like this will be published in the future! I feel like a bit of a strange weirdo person for not loving this as much as everyone else has because I seem to be the odd one out with my rating *goes and sits in corner with own views*. So even though I didn’t like this novel that much, it’s highly likely you still might and it could be worth checking out some other reviews! I recommend this books to those 12+ who enjoy books that explore friendships, bullying and gender identity.

Writing Style: 3/5
Originality: 5/5
Entertainment: 3/5
Character Development: 3/5
Would I recommend this book? I’m on the fence.