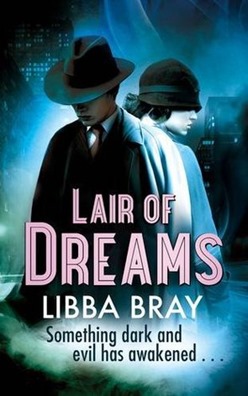 There are many, many reasons I adored Lair of Dreams, but the first reason has got to be Libba Bray’s writing. This lady has got serious style. Again, I was awed by her ability to immerse me in an alternate, vibrant supernatural 1920s New York City. I drooled over her descriptions of prohibition parties, imposing architecture and eerie underground tunnels. At this point, I’m pretty sure Bray could write about maths and make it poetic, and I would still love every minute of the reading experience! I have always enjoyed reading novels by authors that take the time to flesh out beautiful descriptions, and even though technically much of the writing in Lair of Dreams doesn’t propel the story forward, which may make the story seem painfully slow to some readers, this is the kind of writing I always adore, so it was well suited to my tastes! (I was one of those children at school whose stories were 80% description because I loved writing it!)

Lair of Dreams follows very much the same format as The Diviners. There is a central supernatural mystery going on – a sleeping sickness where people fall into fanciful dreams and do not wake up. The problem is blamed on those living in China town, which stirs up tensions and racial prejudice. We are introduced to a new character – Ling, a dreamwalker, who teams up with fellow dreamwalker, Henry to solve the problem. Meanwhile, lots of subplots featuring the central characters from book one are going on giving Bray’s world impressive depth – Evie’s new life as a famous seer on the radio, Sam’s search for his mother, Memphis’s worries about his little brother. While each story initially seems random, they all soon become entangled, cleverly weaving together to form a satisfying ending! While I did find myself wishing to spend more page time with Evie, Sam, Jericho and Theta with the hope of seeing more progress in their stories, and I did feel that Ling and Henry’s side of the story dragged at points and became repetitive, I can’t deny that I loved every minute of reading this novel and I didn’t want it to end. I was completely swept up in the drama, and every day I was impatiently counting down the hours until I would be able to read more of it.

The diversity of characters in The Diviners was one of the main reasons I was drawn to the novel so much, so I was overjoyed to see that this was continued with Lair of Dreams, which put an LGBT character (Henry), as well as a disabled Chinese character (Ling) centre stage in the plot which I absolutely loved! I think this just proves authors shouldn’t be scared to write these characters because they can be just as fun and enjoyable to read about. While I didn’t warm as much to Ling, I still found her interesting, particularly her background, and I feel like she may come out of her shell more as the series progresses. Henry was also a great character, full of longing and dreams – and had a cracking sense of humour! Together the two made a fun team and I loved reading about their surreal dreams and wanderings through abandoned ghostly train stations.

I also enjoyed spending time with my favourite characters from the first novel. Evie’s progression from wishing she was famous to actually being a famous seer on the radio was great fun, as well as seeing her deal with the impact of having had a bad encounter with a malevolent ghost. While Evie does develop some less desirable personality traits which may annoy some, I could understand where she was coming from and thought it was a realistic progression. Her banter with Sam was also brilliant, and I loved the way these two pushed each others buttons! Jericho, Mabel, Memphis and Theta were also as entertaining as ever, and I’m already itching to find out where their stories and mysterious pasts will lead them next!

Overall, Lair of Dreams isn’t perfect. It’s slow in places and Ling fell a little flat as a main character for me, but I couldn’t stop reading, and I didn’t want to story to end! It’s easily one of the best books I’ve read so far in 2015 with its vibrant sense of humour, memorable characters, beautiful descriptions and vivid setting. This book and series is definitely going to be the one that I recommend to the most people this year, I will be shouting about it loud and proud! Now I just have to find a way to pass the time until the next book comes out.
I would recommend this novel to 10+ fans of fantasy and the supernatural who are interested in 1920s America, diverse characters and occult mysteries!