In case you can’t tell by the title, I have been off adventuring again.
Despite having spent three years going to a London University, I still find that there is SO MUCH still to discover! Because of this, every time I go to meet my friend who lives in London, she always tries to introduce me to a different area of the city, or we look up any current events that are on and check them out!

Okay, so I lied a tinsy bit in the title, there was still SOME reading on my day out.
One of the things I love about going to London is the train journey. Getting trains used to give me MAJOR ANXIETY. However, now I see it as an opportunity for overindulging in uninterrupted reading time. For this trip, I chose Personal Demons by Kelley Armstrong, part of the Women of the Otherworld series. These books are awesome lightweight paranormal fun with lots of sass and sexy heart-fluttering love interests to boot. This installment was about a chaos demon infiltrating a rogue group of supernaturals in Miami and was a perfect choice for the journey, I gobbled it up!

For lunch, my friend and I visited Borough Market – a great way to combine sightseeing with drool-worthy grub. Providing people with produce for over a 1000 years, Borough Market is certainly a well-established hotspot. The fact that the stalls also live under a train line bridge causing the world to shake every 10 minutes or so gives it that distinctly urban feel!

Borough market is one of those places I’ve always stumbled into on the way to somewhere else and so I’ve never been able to stop. This time, I got the full experience and wow, there were so many amazing things I didn’t know what to look at first!

I LOVE that we are living in the age of creative street food. I’ve never been one to get ‘excited’ about eating and I don’t like cooking, but street food appeals to all the senses – the spices wafting through the air, the clinking of spoons stirring and mixing, food sizzling and oh, the colours. It’s so alive, and it’s almost like watching a dance as the cooks’ twist and throw and scoop!

It’s also so exciting to see so many styles of food in one place, from good old fashion British all the way to Indonesian. There’s also plenty of vegan and alternative options so there’s something for everyone!

It took me AGES, and at least 5 trips around the market before I was actually able to settle on one thing for my lunch. I went for a lamb box with fresh salad and a creamy chilli sauce (yum!) while my friend had a vegan snack box. We also shared two fruitacular smoothies between us after trying about 8 different free samples. We eventually went for an exotica (mango, pinappe, passionfruit, apple and orange juice),  and a high kick (kiwi, pineapple, strawberry, banana, spirulina, linseed, apple and orange juice. See a fresh juice bar and I will always be first in line! 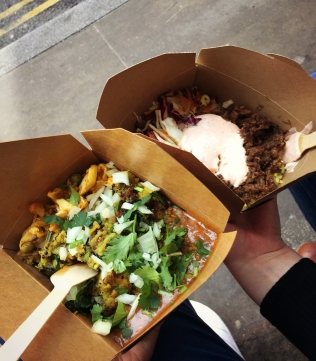 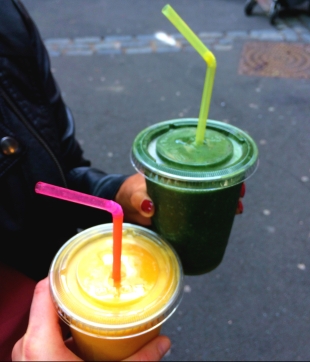 After chowing down on some spectacular lunch, my friend and I also took the time to check out the graffiti mural created to commemorate the victims of the 2017 terror attack, which included Borough Market. It was so great to see how much joy the mural was bringing, with so many tourists flocking to take pictures – turning something negative into a positive, that’s the Brit way!

So the event that we decided to check out for this trip was an Art pop up called Sense of Space (see more here it’s still running until the 18th May). The concept is 4 separate rooms that aim to engage all your senses and relax you, promoting mindfulness in an ever-busy city. On some days they also run events like yoga and silent cinemas, but we didn’t get to see any of these.

The first room was The Doodle Room completely covered in, you guessed it, black and white doodles! Every wall, floor, and crevice was full of playful images which took the artist 4 days to draw. While the room was small it would take hours to look at everything in there. I kept trying to work out whether the artist had duplicated any pictures but I couldn’t find anything that was the same! It must have taken ages to come up with so many different drawings.

The second section was called the Infinity Garden, which was my favourite! It’s also perfectly set up for Instagram culture. This room had beautiful pink blossom trees, which were reflected from every angle by mirrors attached to the walls, giving the impression that you were in a forest. As you walk through, the lighting also changes and you’re serenaded by instrumental music. I was kind of disappointed that they didn’t also pump in some flowery smells, I think that would have been really cool!

The third room was called The Motion Box, which was basically a dark room with a big screen that used gesture recognition – so you could jump around like a big nerd waving your arms, jiggling your hips and do air kicks (actually, maybe that was just me), and then you could see yourself in bubble form on the screen. This was fun for about a minute, and then my friend and I were ready to move on to the final room!

The final room was the Zen Studio, which had lots on beanbags and mirrors. I think this is the space where you’re supposed to be able to practice mindfulness and thoughtful reflections, but to me, it felt awkward and squished and it was very warm, so we exited this one pretty quickly too.

Overall, Sense of Space was a really interesting experience. I’m not sure it quite achieved what it was hoping for in all areas, for instance, the first two rooms were fantastic but the second two were a bit of a let down, and the Zen room didn’t really promote relaxed vibes. Also, because the rooms were small, only a certain amount of people could go into a room at a time – as the first two were the most interesting, this caused quite a big hold up, and you did kind of feel like you were keeping people waiting at times when you wanted to soak up the experience and stay longer! Ultimately though, this was a really interesting and unique free art installation that I would recommend, and you can get some great pics out of it too!

Are you a fan of street food, art or popups? What are your favourite places to visit in London? Or if you’ve never been, where would you be most interested in visiting? Let me know in the comments!

17 thoughts on “#WhenImNotReadingBooks: A Day of Culture in London”