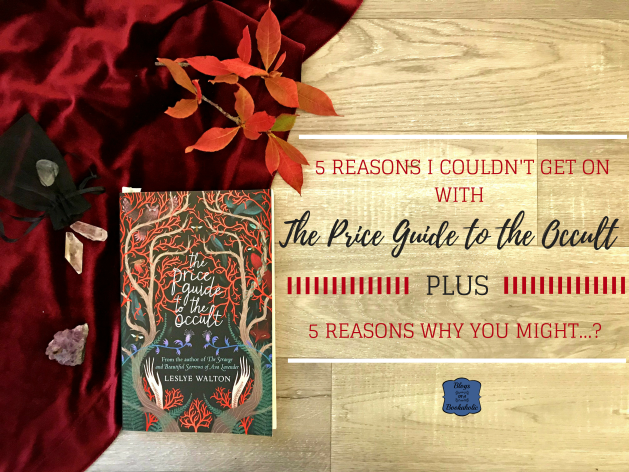 Oh man. The disappointment of this book. I can’t even handle it.
The thing is, I thought this was a slam dunk for me because:

a) GORGEOUS COVER. Doesn’t it just make you want to pick it up and stroke it immediately?
b) I love stories about witches, curses and forbidden spellbooks and I rarely find a book focussing on these things that I dislike.
c) The author’s debut book was SUPER POPULAR and highly praised.

Um, well I hate to be the one to burst everyone’s pumkin, but while The Price Guide to the Occult may look cute on the outside, it’s kinda rotten, smooshed and disorganised on the inside.

Not only was this my first 1-star read of the year, but it’s also the first ARC I’ve ever disliked. So while I’m thankful to the publisher for providing me with a copy in exchange for an honest review, I am unfortunately unable to say much that’s positive about this novel. However, I am going to do my best to both outline the issues I have with it, and also highlight some reasons why you might get on better with it than I did!

*TRIGGER WARNING: This book contains self-harm and child abuse and I will be discussing it.*

So, what’s it all about?

When Rona Blackburn landed on Anathema Island more than a century ago, her otherworldly skills might have benefited friendlier neighbors. Instead, guilt and fear led the island’s original eight settlers to burn “the witch” out of her home. So Rona invoked the privileges of a witch; she cursed them. But such a spell always comes with a terrible price, and in punishing the island’s residents, Rona also bound her family ever tighter to them.

Fast-forward to the present day and all Nor Blackburn wants is to live an unremarkable teenage life. And she has reason to hope that she may have escaped the thorny side-effects of the family matriach’s curse. But then a mysterious book comes out, promising to cast any spell for the right price. The author – Nor’s own mother – seems capable of performing magic that should be far beyond her capabilities. And such magic always requires a sacrifice.
A storm is coming. It’s coming for Nor.

5 Reasons I couldn’t get on with The Price Guide to the Occult:

Seriously. That age-old author writing rule show don’t tell is everything. I feel like we were told what kind of person the protagonist was rather than seeing it through her actions, told all about the evil villain of the story rather than feeling how evil she was and discovering why she became that way, and overall the author tells us what is happening rather than allowing us to actively feel the drama play out. I felt like my eyes kept glazing over! I also felt that the writing, in general, was so disjointed and bizarre to the point where I actually struggled to follow the story at points.

2. The laws and rules of this fantasy world are never really explained.

I cannot express enough how important (certainly to me anyway) having boundaries in books with any kind of fantasy, supernatural or paranormal element is. For example, pick any superhero character and you can easily list their strengths and weaknesses. Equally, anything related to magic normally has set limits e.g. the character can do x y and z before they run out of juice. In The Price Guide to the Occult, there is none of this…and it feels as if the author just makes up everything as she goes along, adding new powers and abilities where convenient. A great example of this is that the villain is supposed to be the strongest witch ever and impossible to defeat, then out of nowhere another character suddenly becomes stronger and knocks her out. It’s unsatisfying and anticlimactic. 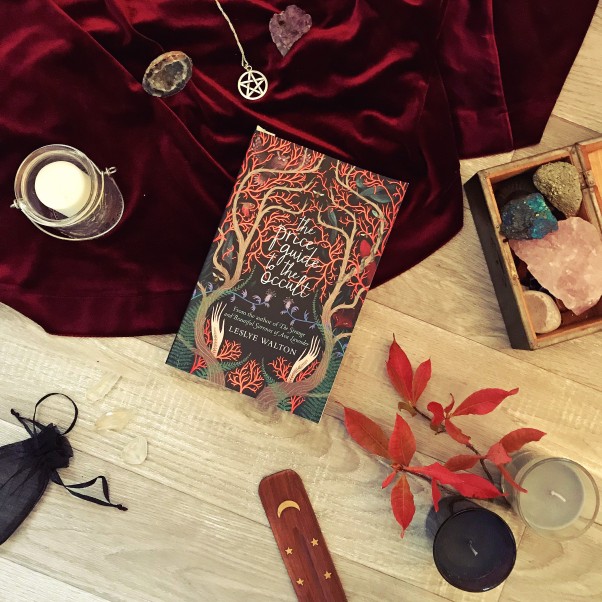 3. The main character’s aim in life is to be as uninteresting as possible…

…and therefore she is also uninteresting to the reader, which I’m sure is not what the author intended! The thing is, Nor should be such an interesting character. She’s a descendant of Rona Blackburn, an incredibly powerful witch with a fraught history (Rona, wronged by a group of men, wields a curse that backfires which means a) all her descendant’s powers will be limited to only one ability and b) all the females of her line will fall for someone from the line that wronged them, and then the male will disappear without a trace leaving a baby-shaped present). In addition, Nor has an evil, manipulative mother, hangs out at a witchy shop and has the gift of being able to speak with animal and plants.

All of these things should make her PRETTY BADASS. Yet instead, she’s whiny, bland, downright rude to those who care about her, she uninteresting and instead of being an active agent in her own story, she just gets dragged along by various events. When I think of Nor, I think of a dour shade of browny-grey.

It’s shown very early on in this novel that Nor self-harms, and I feel like the dreamy descriptive quality of the writing almost romanticised this? It felt like this was supposed to be some kind of interesting quirk that was part of Nor’s personality which is NOT OKAY. Also, the fact that she self-harms is never discussed or addressed in any kind of responsible way, it’s just there. There’s one off-handed comment about her having had therapy in the past, AND THAT’S IT.

Additionally, the novel reveals that Nor was not only neglected as a child but physically harmed by her mother (and was even used for bloodletting to make spells work). This, again, is never addressed. These are serious topics that should never be touched on lightly without considerable care and attention. Instead, they feel plonked in like a natural everyday occurrence which made me very angry.

The author does provide some crisis resources in the back of the novel, but this is literally the only indication that she takes these topics seriously.

Yes, my friends, there’s also one of our favourite tropes, a weirdly concocted love triangle. I’d like to mention here that this novel is only 288 pages – it’s short. So how can you flesh out a complex love triangle and make readers care about each of the potential suitors? The simple answer is, you can’t. Boy 1 feels like a dressed up case of insta-love, and boy 2 takes more of a love-hate stance. Both characters are utterly one dimensional and have no interests of their own, and there’s not even a single spark of chemistry with the protagonist. Nuff said. 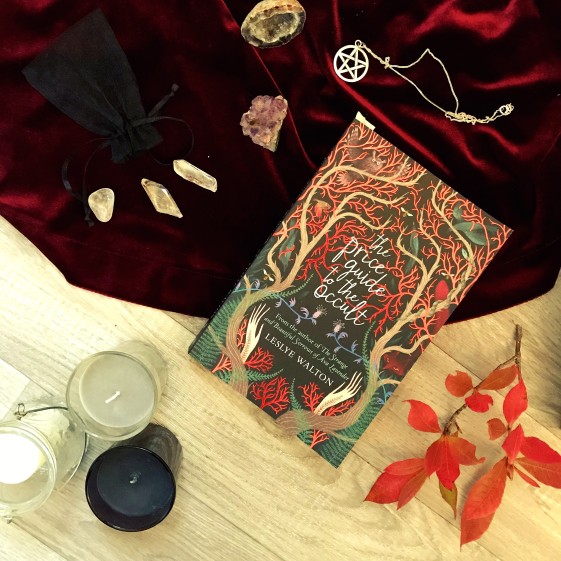 I am, at heart, a positive person and I do try to see the good in everything. There’s also the possibility that I am just AN EXTREMELY SPECIAL SNOWFLAKE for not liking this book? Maybe, it’s just the case that it’s not my sort of thing? So here’s a few reasons why you may actually enjoy this novel:

This novel is full of foodie descriptions that made my mouth water. If you like reading about food in books, this could be a major plus point!

2.) If you enjoyed The Strange and Beautiful Sorrows of Ava Lavender

Ava Lavender was Walton’s debut novel and it got an unprecedented number of glowing reviews on Goodreads and the blogosphere. Unfortunately, I haven’t read it so I can’t comment on whether these two novels are similar, but I do remember a lot of people calling it beautifully bizarre. Price Guide was also very bizarre, so it is possible that I am one of the minority of people that just don’t get her style!

This whole story has a very fairytale-esk feel, especially the prologue where we hear about the legend of Rona Blackburn. The prologue was my favourite part of the novel. I also have to consider here that many aspects of fairy tales do not make sense, and a lot of things happen that are never explained, so its POSSIBLE this was the style the author was going for?? 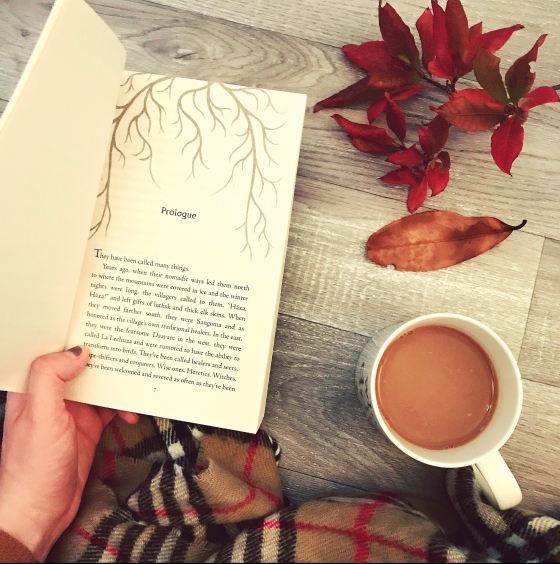 “Your grandmother and I decided we needed something to give us strength. We haven’t yet decided if that strength will come from food or vodka”

Nor’s grandmother is awesome, she took Nor in when her mother abandoned her and comes out with all sorts of sassy comments. Her history with Nor’s mother is also very interesting and was one of the aspects I did enjoy.

5.) It’s possible that I have just missed the entire point or concept this author was going for and you should just ignore me.

Maybe I’m just a weirdo and you’re all normal? Like, I just don’t get this book? AT ALL. At points, it was so bizarre that I kept going ‘what’ and ‘huh’ and genuinely was confused about what was going on. WHAT IS LIFE ANYWAY? I KNOW NOTHING JUST LIKE JON SNOW. DON’T LISTEN TO ME.

This is definitely one of the most baffling, messy and aggravating books I’ve read in a long time, AND I EXPECTED SO MANY GOOD THINGS. I also found it’s approach to sensitive topics severely problematic, but I did try to see the good in it as well! (I tried guys okay, I tried).

What’s the most disappointing or confusing book you’ve read this year?
If you’ve read The Strange and Beautiful Sorrows of Ava Lavender maybe you can explain to me what I am missing?!?
If you’re up for it, rec me some witchy books in the comments!

2 thoughts on “5 Reasons I Couldn’t Stomach The Price Guide to the Occult (Plus, 5 Reasons You Just Might Like It?)”