I think anyone reading this post will agree that we all read a lot of books. The difficulty comes when there are SO MANY AMAZING BOOKS TO CHOOSE FROM!

There are some authors that you hear about, again and again, tagged along with endless superlatives, and yet somehow never get around to reading despite your best efforts.

Brandon Sanderson has always been one of those authors for me.

I’m a huge high fantasy fan and Sanderson’s work has been recommended to me since I started blogging 6 years ago. After seeing so many glowing reviews for a variety of his novels, I purchased Elantris because it was a stand-alone and I had far too many series on the go at the time.  Afterward, I was told that it wasn’t the best of his works to start with, and so there it sat on my shelves for, you guessed it, 6 years. HOWS THAT FOR PROCRASTINATION?!?

Fast forward to 2019 Becky tackling her backlist, and all I can say is that if this isn’t one of Brandon Sanderson’s best, I can’t WAIT to dive into to all his other books, because I enjoyed this immensely!

ELANTRIS WAS A PLACE OF GLORY. The capital of Arelon, the home to people transformed into magic-using demigods by the Shaod.
But then the magic failed, Elantris started to rot, and its inhabitants turned into powerless wrecks.
And in the new capital, Kae, close enough to Elantris for everyone to be reminded of what they have lost, a princess arrives. Sarene is to be married to unite Teod and Arelon against the religious imperialists of Fjordell. But she is told that Raoden, her husband to be, is dead.
Determined to carry on the fight for Teod and Arelon’s freedom, Sarene clashes with the high priest Hrathen. If Hrathen can persuade the populace to convert, Fjordell will reign supreme.
But there are secrets in Elantris, the dead and the ruined may yet have a role to play in this new world. Magic lives.

I really enjoyed the plot of Elantris; its fantasy world you can get a foothold in quickly, and settle in for the ride.

It follows three different character perspectives (but in the third person) and I enjoyed all of them immensely.

First, we have Raoden, Prince of Arelon who wakes up discovering that the Shaod has come upon him, (which is basically a kind of supernatural plague that appears overnight with seemingly no rhyme or reason, and does not discriminate between nobleman or peasant). The disease means you’re exiled into the once beautiful and godly city of Elantris, which is now filled with sludge, crime, and rival gangs.

Next, we have Sarene, a princess from another city on her way to be wed to Raoden. When she steps off the ship, she receives news that he’s ‘died’, but that according to her wedding contract (based solely on political alliances) this makes them married. Sarene loves politics and is determined to learn the ins and outs of her new city and help strengthen its crumbling walls and disliked king.

Finally, we have Hrathen a morally grey priest sent to convert the city to his religion, even if it means toppling the monarchy or resulting to mass murder in the process.

The worldbuilding in this novel is excellent. Sanderson has created a fantasy world with different religions, cultures and political climates. Arelon, where we spend most of the book, for example, has a hierarchy based on wealth. The King is the most well off merchant in the city and if you lose your wealth, you lose your title.
Arelon itself is a fascinating place because it lives in the shadow of the city Elantris. Elantris once used to be home to God-like humans that glowed and used magic. Then one day, the Elantrians not only lost their power but it was replaced with a disease that caused blisters, unimaginable pain and the inability to die. The people of Arelon are both fascinated and terrified by the Elantris mystery, forever worried that they will succumb to the disease. The history of Elantris is slowly unraveled piece by piece in an immensely satisfying way that made the pages fly by. 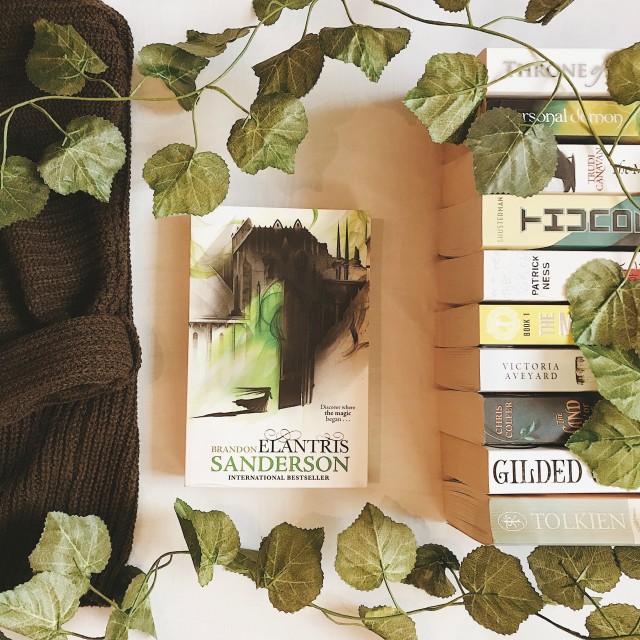 Elantris is 615 pages long, and while I did feel that it could have been a tiny bit shorter, I didn’t once feel bored. It’s slower paced than your average fantasy, mostly because it is very much a political intrigue story; all chess moves, sly conversations and thinking three steps ahead. However, while there wasn’t much action until the finale, I felt that every chapter was there for a reason, every part of the story propelled the characters and central mystery forward, and I was fascinated every step of the way.

I absolutely loved all the characters in Elantris and was very much concerned for their fate as the novel came to a close. I was invested whether their roles were big or small.
Raoden the Prince banished to Elantris tries to make the best out of a bad situation by gaining friends and allies. He helps the lost and damned with his inspiring charisma, gives people meaning and purpose and starts to unravel the secrets of Elantris, even to his own detriment.
Sarene is a TOTAL BADASS and a very intellectually strong female protagonist. She’s too tall for a ‘normal lady’, average looking, brash, outspoken and absolutely adores politics. She’s definitely a little arrogant too and very good at ordering people around, but her heart is in the right place and she’s fiercely loyal to her friends and the countries that she represents. Her schemes and plans also outwit most of the men in the court!
Hrathen initially seemed like he would be an annoying character and a religious fanatic, but he soon becomes far more interesting and morally complex as his past is revealed. He kept me guessing right up until the end and I had to admire his sneakiness!

I really cannot express enough how much I enjoyed Elantris. I raced through the pages gobbling up each chapter. I don’t even really have any critiques of it and it fell just shy of a 5-star read for me. I don’t think this story will appeal to everyone though because it’s very much a political fantasy as opposed to an action-packed one, so that’s something to bear in mind! I can’t wait to try out more Brandon Sanderson novels, and I think this is the start of an excellent long-term relationship with a new author. 😉 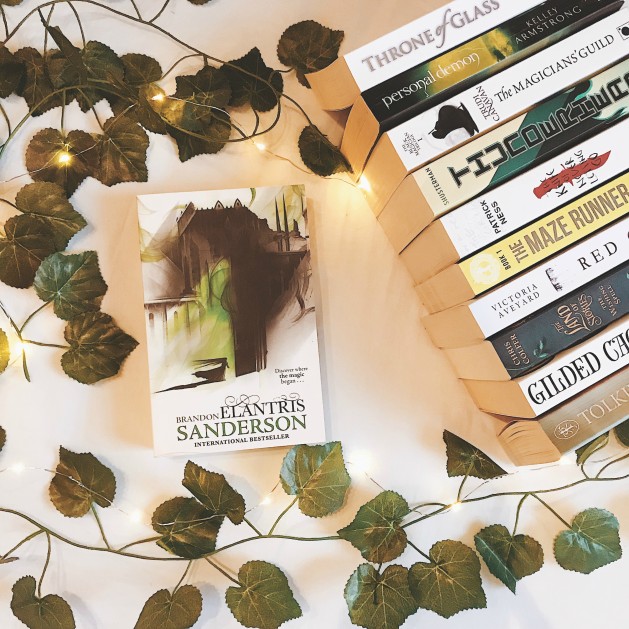 What authors have you had recommended to you multiple times and yet somehow never get around to reading?
Have you read any Brandon Sanderson? If so, which of his novels would you recommend I try next?!