Overall Impression: A self-indulgent exploration of the well-known Dracula mystery in which the vampire has become oddly obsessed with hunting librarians. 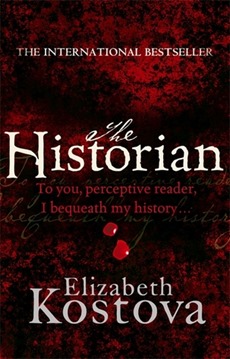 The Historian has sat on my shelf unread for over seven years. Yeah, that’s pretty shameful! I picked up my battered copy for a whole 20p at a hospital book sale, unable to resist the fancy swirling writing and menacing blood droplets on its cover. Having been struck down with a seriously evil case of tonsillitis this week, and having already binge watched all of the Outlander Season 2 TV series, I decided it was time to pick up this neglected tome of a book and show it some love.
The best way I can sum up this novel is that it was a good, entertaining book…until suddenly it wasn’t.

To you my perceptive reader, I bequeath my history…
Late one night, exploring her father’s library, a young woman finds an ancient book and a cache of yellowing letters addressed ominously to ‘My dear and unfortunate successor.’ Her discovery plunges her into a world she never dreamed of – a labyrinth where the secrets of her father’s past and her mother’s mysterious fate connect to an evil hidden in the depths of history.

END_OF_DOCUMENT_TOKEN_TO_BE_REPLACED

Overall Impression: Longwinded; but ultimately a great atmospheric and tangible tale of the most notorious vampire in pop culture.

I have wanted to read this book for so long, that I almost

can’t believe I’ve finally done it! As a girl who got caught up in the vampire craze of YA literature, I knew that at some point I would have to delve back in history to one of the original sources and inspiration; Dracula. While, like many others I had of course heard of Dracula from the constant stream of references, puns and parodies saturating our media, I never really had any knowledge of the details and plot twists it entailed. And I have to say in many ways, it was not at all what I was expecting! When I finished the book in the early hours of 5am I was almost left with the feeling that the whole tale was real, or at least, that it could have really happened.
This I think, is a large aspect of its appeal.
This book was also read for the belated Eclectic Reader Challenge for the horror genre.

Collected inside this book are diary entries, letters and newspaper clippings that piece together the depraved story of the ultimate predator. A young lawyer on an assignment finds himself imprisoned in a Transylvanian castle by his mysterious host. Back at home his fiancée and friends are menaced by a malevolent force which seems intent on imposing suffering and destruction. Can the devil really have arrived on England’s shores? And what is it that he hungers for so desperately?

Jonathan Harker is a young Englishman with the new burden of responsibility, and all he wants to do is succeed. So when he is sent to help the mysterious Count Dracula he does everything within his power to please him. It is not long however, until he starts to find a few strange things about the place. There seem to be no serving staff – or anyone else living around for that matter. Why does the Count never eat, and where does he skulk off to late at night?  END_OF_DOCUMENT_TOKEN_TO_BE_REPLACED

This is just a quick post to say that I haven’t put anything on here much partly because I have tonnes of work for school, but also because I am reading the book From Demons to Dracula by Matthew Berestford because I am doing a media project on “how the representation of women in the vampire genre changed in film and TV.”

I would be extremely grateful if you could give me some of your views on this, as it would be great to have a section where I get a variety of people’s views on this topic. How do you feel women are represented in Twilight? Vampire Diaries? Dracula? Interview with a Vampire? True Blood? Buffy the Vampire Slayer? and any other you can think of. It would be really helpful if I could get some comments from you! And if you could take the poll that would also be great! END_OF_DOCUMENT_TOKEN_TO_BE_REPLACED