Good afternoon bloggers! I hope you’re well! It’s been pretty silent over here the last couple of months, hasn’t it?

That wasn’t really intentional, but the last two months have been a bit of a rollercoaster. It’s been super busy at work and at home, and so even when I have had the downtime to blog, I either haven’t had the want to write or have felt so burnt out that the words don’t flow! I’ve found myself reaching towards Bookstagram more because LESS WORDS. My mental health also took a bit of a dip and I felt like I was taking on a lot of other people’s problems, so I’ve been doing some extra self-care!

But, but, BUTTTTTT, by the time you read this, I will have already hopped over the pond, off on a France roadtrip adventure, and I am PUMPED. I’m going to be going from Calais, all the way down to the south coast, stopping at lots of pretty towns, and I will make sure to share my travels with you when I get back!

Actual footage of our roadtrips when the good tunes come on.

WHAT I GOT UP TO IN MAY AND JUNE:

END_OF_DOCUMENT_TOKEN_TO_BE_REPLACED

Another month gone, another wrap-up post. These sure do come around quickly sometimes! (I’d also just like to preface this by saying that despite the title there will be NO Game of Thrones spoilers in this post!)

I’ve been sitting here trying to rack my brain for something interesting enough to share with you guys from April. I did think about trying to convince you that I’d learnt to talk to animals, built a spaceship, or found a fossilized dragon egg in amber that had hatched and I’d become a dragon rider (still ever hopefully after my childhood of watching Jurrasic Park), but somehow, I didn’t think you guys would take me at my word?

April can basically be summed up in Dory’s famous words ‘just keep swimming…’ or the better know phrase, ‘keep on keeping on’.

Of course, there was that brief moment in the UK where we got July-worthy sun over the bank holiday weekend and we all had a freak-out and dug out the BBQ equipment, but it wasn’t long before the status quo returned.

By far the best thing about April for me was seeing all the amazing love you guys have given my Pancake Book Tag. SO many of you have participated in this now and I kind of feel really emotional about it??! I really didn’t think this many people would do it and the whole thing has far exceeded my expectations. You guys are absolutely incredible, THANK YOU! :’D

So, let’s get on with the wrapping up!

END_OF_DOCUMENT_TOKEN_TO_BE_REPLACED

Dunnnn, dunn, dun dun, dunnnn, dunn, dun, dun, dunn, dunn, dun, dun, dunn, dunn dun dun dunn dunn…
Yeahhh, I’ve pretty much had the Game of Thrones theme tune stuck in my head for the entire time it took me to write this post. I feel like I’m going slightly insane now! So yes, while Becky has been somewhat silent on the blog, in real life she has been busy, shifting through thousands of pages worth of Westeros, where dragons reign and people fight over a really uncomfortable chair. Woohoo! (Weirdos). After watching the season 5 shocker finale on TV, I was a little distraught and desperate for more George R.R. Martin, not to mention ANSWERS. I’ve also recently rewatched the entire show with the boyfriend because I am trying to educate him on all things nerdy (it’s working, slowly). All of this led to me feeling determined to try and catch up with the books in time for the release of season 6 and the next novel,Winds of Winter. So here are my reviews of books 3-5!

END_OF_DOCUMENT_TOKEN_TO_BE_REPLACED

The internet is a wonderful thing, but it’s also hazardous. As you navigate your way around several social networks in a day you are faced with what seems like infinite information, and within it, lurking around corners you’d least expect, are book spoilers.

There have been several times over the past few years where I have been utterly spoiled beyond the realms of forgiveness, and have been left in seething rages unquenched by even chocolate or cute kitten pictures. END_OF_DOCUMENT_TOKEN_TO_BE_REPLACED

(To read my review of the previous book in the A Song of Ice and Fire series, A Clash of Kings click here.)

This book was all kinds of awesome. George R. R. Martin, you’ve done it again!
For those who don’t know, the UK version of A Storm of Swords is split into two parts (I know, annoying right?) so I kind of feel weird reviewing a book when I’ve only read half of the originally intended material, like I might not be judging it fairly because it cut off before its intended finale. Having said that, I enjoyed book 3 part 1 immensely, and now I can’t wait to dive into part two!

Please note: For those of you that haven’t read the previous books, this review will contain spoilers about plots and characters from those books. However, this review will not contain any spoilers for A Storm of Swords: Steel and Snow. END_OF_DOCUMENT_TOKEN_TO_BE_REPLACED

Hello blogity friends! As you can probably tell, university has been keeping me very busy of late, which has become evident by my lack of presence on the blogosphere! Imagine my horror when I logged in and realised I hadn’t blogged in over a month, WHOOPSIE! *Edges sideways.* This semester has been one fun, crazy, stressful, and brilliant ride, and I can only hope the second semester will be just as good. It’s been a lot of hard work assignment-wise, especially as each piece is so weighty to the overall grade but ultimately everything has run pretty smoothly. The results I’ve been receiving have far exceeded my expectations, and this week I officially received ethical approval for my dissertation (aka, permission to experiment on people, mwuhuhuhuuuuuu!).  END_OF_DOCUMENT_TOKEN_TO_BE_REPLACED

(To read my review of the first book in the A Song of Ice and Fire series, A Game of Thrones click here.)

After devouring the first book in this series I vowed that I would take a decent break before tackling the second novel, A Clash of Kings. Partly so I could recover from the immense page length but also so that I would appreciate the story more. However, after reading only two other books I soon found myself yearning for more of the world of Westeros. Instead of forcing myself to read other books when I wasn’t in the mood for them I decided to give into the inevitable, and thus began my journey though this 708-paged beast of a book!

Please note: For those of you that haven’t read the previous book A Game of Thrones, this review will contain spoilers about plots and characters from that book in the first two paragraphs only. However, this review will not contain any spoilers for A Clash of Kings. END_OF_DOCUMENT_TOKEN_TO_BE_REPLACED

Overall Impression: A bloody battle of wits, armour and cunning, but not everyone is playing fair. 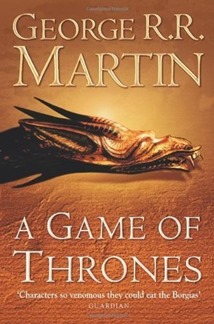 I am desperately in love with all things A Game of Thrones. As an avid follower of the TV series and a big fan of fantasy novels, I couldn’t not read this book. I have been looking longingly towards its place on my bookshelf for months. (Well, actually it was on top of my bookshelf because there’s no shelf space left, oops.) I love what this series has done in terms of making high fantasy more mainstream. There are many discerning people who look down on the genre, so I think it’s great that so many people have gotten behind this series. With the summer months spiraling out before me, I finally felt like it was time to pick up the 803 page doorstop and get lost within its pages!

In the game of thrones, you win or you die.
As Warden of the north, Lord Eddard Stark counts it a curse when King Robert bestows on him the office of the Hand. His honour weighs him down at court where a true man does what he will, not what he must… and a dead enemy is a thing of beauty. The old gods have no power in the south, Stark’s family is split and there is treachery at court. Worse, a vengeance-mad boy has grown to maturity in exile in the Free Cities beyond the sea. Heir of the mad Dragon King deposed by Robert, he claims the Iron Throne.

This is an intimidating book to review, its sheer length, complexity and endless characters make it difficult to summarise in a way that promotes its awesomeness but prevents giving away spoilers. Plus, I think the less you know the more intense the reading experience is. Essentially the one sentence version is that a bunch of power hungry people are fighting over the Iron Throne that rules over the Seven Kingdoms of Westeros, and some of them have more legitimate claims than others. END_OF_DOCUMENT_TOKEN_TO_BE_REPLACED

“Bran thought about it. ‘Can a man still be brave if he’s afraid?’
’That is the only time a man can be brave,’ his father told him.”

I have been on a total Game of Thrones kick lately. With the fourth season on TV in full swing and having recently devoured the first book, my head is firmly stuck in the fantasy world of Westeros. I was fuming when I heard that there would be no episode on this week, so what better way to pass the time than quoting it instead?!
The quote  END_OF_DOCUMENT_TOKEN_TO_BE_REPLACED 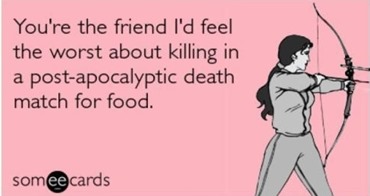 I was chatting to a friend last night about my current obsessions – New Girl (it was love at first sight when Jess made a LOTR reference in the first episode) and Game of Thrones. We were discussing how awesome they are because no matter how many episodes we watch we are always desperate for the next one, especially Game of Thrones it’s been so intense this season! Of course, this left to me pondering about buying the Game of Thrones/A Song of Ice and Fire books again. I have wanted to read them since the series began and I am a big fantasy fan so they have been difficult to resist. I mentioned this to my friend and the result was some texting with heavy use of Caps Lock, you have been warned. 😉

Me: I REALLLY want the Game of Thrones books.

Friend: NO YOU DON’T, YOU HAVE TOO MANY BOOKS ALREADY.

Me: BUT I WANTS THEM. I WANT THEM SO BAD.

END_OF_DOCUMENT_TOKEN_TO_BE_REPLACED

QOTD: Do you like stories with happy endings? Or do you like prefer drama filled bittersweet ones?
QOTD: Do you remember when you first fell in love with books? Did it happen slowly or all at once? 📚
QOTD: How has your February reading gone? Are you hoping to squeeze in any more books before the end of the month?
Let’s play bookish merch this or that!
QOTD: Do you own any movie props/replicas? Or is there one you would like to own? 😁
QOTD: What’s your biggest book merch weakness/what’s the type of book merch you own the most of?