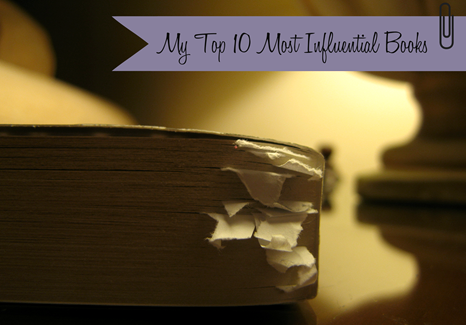 Every so often in life you come across one of those special books, a book that has a revolutionary effect leaving you permanently marked for the better. One that resonates with you, forces you to challenge your own thinking or opens up a new world you were unaware existed. I am sure every reader has come across at least one of these books, whether it was the first they ever picked up, or a story that was there for them exactly when they needed it. As an enthusiastic bookworm and student, I like to think every book I pick up has influenced me in some way, however, there are certainly some that have had a bigger effect than others!

I was super excited when I saw  END_OF_DOCUMENT_TOKEN_TO_BE_REPLACED

Well originally I was going to use The Hunger Games Trilogy for this day, but as that ship has sailed far past the area of twelve months, I guess I will be thinking again! Although this year started slowly in terms of reading due to settling into University, I have sure been making up for that this summer by racing through many books! I’m happy to say there have also been a few five stars handed out in my reviews which I love being able to do because it doesn’t happen often. 😀 Within the last twelve months I have given out five five stars, (ohh how poetic) and that’s pretty good going for me. But how an earth do I pick which of these elite is my favourite?  END_OF_DOCUMENT_TOKEN_TO_BE_REPLACED

Well this is probably going to be another short but sweet post I imagine because seriously, who tells people they’ve read something when they haven’t?! (Apologies if you actually HAVE done that) I could understand someone doing it at a young age I guess if they wanted to look cool or intellectual, but I don’t see why anyone would feel the need to do that. There is nothing wrong with saying you haven’t read a book, no matter how popular or critically acclaimed it is. There are so many wonderful novels in the world and it is impossible to read all of them! So instead I am going for ‘a book you tell people you’ve read but haven’t actually finished’ because I do have two books that fit this criteria.

As I have mentioned before I don’t often abandon books, so these were the exceptions to the rule rather than the norm. The two that I am going to be talking about were books I was made to read at school, figures! END_OF_DOCUMENT_TOKEN_TO_BE_REPLACED

Overall Impression: One boy’s journey of self discovery packed to the brim with some of the most memorable characters I have ever come across.

I was scared to open this book, and I mean scared. That never happens to me, but a had this huge trepidation about Dickens. I remember loathin

g Oliver Twist when I was younger, I encountered the film many times and the book itself during year nine English and have steered away from all Dickens since. God help anyone who starts singing about ‘gruel’. Seriously, there is a special place in hell dedicated to people who sing those songs. 😛
However, in the name of literature (and because the book is on The Rory Gilmore Challenge) I decided to attempt Great Expectations, all the while thinking I should rename it ‘Low Expectations’. Even having seen TV adaptions and enjoying them, I couldn’t put away that pain from year nine English.
Ohh how I have been missing out! I took the book on holiday with me because I thought it would help me fall asleep earlier, but instead it kept me up later!

Pip’s life as an ordinary country boy is destined to be unexceptional until a chain of mysterious events leads him away from his humble origins and up the social ladder. His efforts to become a London gentleman bring him into contact not just with the upper classes but also with dangerous criminals. Pip’s desire to improve himself is matched only by his longing for the icy-hearted Estella, but secrets from the past impede his progress and he has many hard lessons to learn.

Philip Pirrip know simply as Pip by most, is an unassuming young orphan in the care of his older sister and her husband, Joe. They live poorly, scraping by on dinners of bread and butter in a village near the misty marshes where criminals have been known to wander.  END_OF_DOCUMENT_TOKEN_TO_BE_REPLACED