Overall Impression: A leisurely walk through history with some strikingly memorable characters. 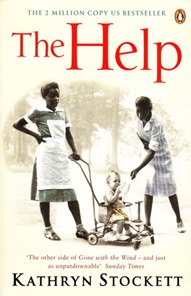 This is another book I never really planned to read because it seemed impossible that it could live up to the insane hype around it. Its chick-lit-esk cover also confused me somewhat, why was a book dealing with important issues masquerading around in such a way? It seemed like an odd mix. Although I felt this way, I thought it would appeal to a member of my family so I suggested it as a Christmas gift for her. She read it, enjoyed it and then passed it on to me due to my reputation as a woman who adopts all unwanted books to look after, lol!
With the positive comments from all of you echoing in my ear I with much trepidation opened the first page to discover a tale of courage and hardship in the deep south.
I also just realised that I can use this as my last book for the 2012 Eclectic Reader Challenge. Huzzar, it is complete – some 5 months late but COMPLETE. WOO!

Enter a vanished world: Jackson, Mississippi, 1962. Where black maids raise white children, but aren’t trusted not to steal the silver…
There’s Aibileen, raising her seventeenth white child and nursing the hurt caused by her own son’s tragic death; Minny, whose cooking is nearly as sassy as her tongue; and white Miss Skeeter, home from college, who wants to know why her beloved maid has disappeared.
Skeeter, Aibileen and Minny. No one would believe they’d be friends; fewer still would tolerate it. But as each woman finds the courage to cross boundaries, they come to depend and rely upon one another. Each is in search of a truth. And together they have an extraordinary story to tell…

The Help switches between three main perspectives for its duration Aibileen, Minny and Miss Skeeter. Aibileen is a black maid who specializes in taking care of children, her current commitment is Mae Mobley, a child desperate for her mothers approval receiving only agitated looks and scolding in return.  END_OF_DOCUMENT_TOKEN_TO_BE_REPLACED