(Please Note: I do not own any of the images on this page, or the YouTube video) 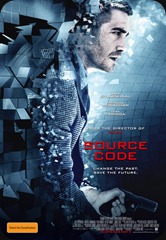 Because I’ve been feeling so ill the last couple of days, I was given the rare opportunity to rent a film. I jumped at the chance and begun flicking through the options of movies. Eventually I came across one named Source Code featuring Jake Gyllenhaal that I’d never heard of. I don’t know if that’s because it wasn’t advertised much, or because I live in a cave when it comes to the latest movie releases, but hey-ho. I rented it.

An helicopter pilot Colter Stevens who works for the army, (played by Jake Gylenhaal) is confused when he wakes up on a train going to Chicago. He is even more confused when people think he’s a man named Sean Fentress. As he tries to work out what’s going on, the train is blown up, and he finds himself transported back to a mysterious capsule. An army officer talks to him via a screen in the capsule, and explains he is inside the Source Code, which is a device that allows you to go back, and relive the last 8 minutes of someone’s life before they die.  It’s his mission to go back in time, or use ‘time rearrangement’ as they call it, to find out who bombed the train and prevent further attacks by the bomber which have been predicted to hit Downtown Chicago. As he continues to be sent back, he starts getting to know the passengers, especially his travel partner Christina (played by Michelle Monaghan) and becomes determined to try and save them, even though he’s told that you can’t alter what happens within the Source Code.
This movie has many twists and turns that you aren’t expecting, but I won’t list them here as they will spoil the movie.

You might think that it would get boring watching the same man re-live the same 8 minutes over and over, but things as simple as changing the angles of the shot, by using cinematography make the journey different each time and offer a different perspective.
This film has an amazing concept that’s intelligent, and intriguing.  It has a cleaver structure that raises more questions than it answers, and just when you get the answer to one of your questions, it’s replaced by ten more. It’s also good because it doesn’t talk down to the audience. It introduces complicated theories, and gives us enough credit to be able to follow the storyline.
The characterisation is also great, each time pilot Colter Stevens is put on the train we slowly learn more about each of the characters, making us empathise with them and their situation. At the start of the movie many of the characters come across as rude and arrogant but we soon grow to like them.
The actors also put on an excellent and believable performance, especially Jake Gylenhaal and Vera Farmiga as the stern conflicted Officer that talks to the main character through a webcam.
This film is a definite must see.

I would definitely recommend this film, especially  to people that are fans of films like the Bourne series, Shutter Island, Eagle Eye and The Prestige that like syfy, action thrillers that are intelligent, and cleaver. Both males and females will enjoy this film probably from the age of 11 right through to people in their 70s.