One of my favourite aspects of going to the cinema is seeing the adverts. Many people find this strange; but I love the build up, the anticipation. As you sit 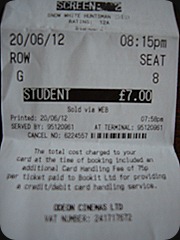 there shuffling in your seat, you begin to wonder with a twinge of nervousness if the film will be any good. I’m always the one saying ‘hurry up we’ll miss the start’ people reply ‘it’s alright, we’ll only miss the adverts’ to which I whine ‘but I LIKE the adverts!’
When I went to see The Hunger Games with my friends we got there early so we saw every advert. And amongst the mix of Orange Network, Haribo and War Horse was a theatrical trailer for Snow White and the Huntsman which immediately caught my attention. Well that advert stuck with me, and here we are three months later. See; cinema adverts RULE 😉

The Plot
Once upon a time, in the middle of winter there was a Queen walking in the castle gardens. While admiring a rose she pricked her finger and three drops of blood fell on the snow. The red looked so beautiful on the white that she thought to herself:
If only I had a child with skin as white as snow.
Lips red as blood.
And hair black as ebony.
– The Brothers Grimm
When Snow White’s (Kristen Stewart) mother passes away the kingdom mourns in sorrow. But when King Magnus saves a beautiful woman named Ravenna (Charlize Theron) from a dark army he falls in love once again, and decides to marry. The kingdom rejoices in celebration of his happiness. However all is not well, later that night in the cover of darkness Ravenna murders King Magnus and with the help of her brother (Sam Spruell) they seize control of the kingdom and lock Snow White up in a tower.
We fast forward several years and the kingdom is in ruin, waning under the harsh rule of Queen Ravenna. One evening when following her normal routine of mirror mirror she discovers that there is another set to surpass her; Snow White. However she is told the object of her undoing is also the object of her salvation. If she destroys Snow White’s heart, she will stay young forever; eternal life.
Ravenna orders her brother off to the tower to kill Snow White, but she outsmarts him and escapes, fleeing into the dark forest. The Queen enlists the help of a huntsman (Chris Hemsworth) to capture her and the rest of the film follows these events and there repercussions as Snow White tries desperately to stay alive and reclaim the throne. 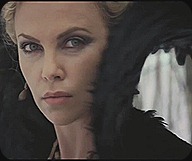 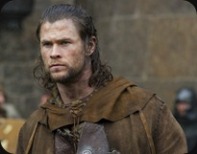 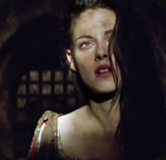 The Verdict
Wow, I was so blown away by this film!
I must admit I was skeptical going in. I thought it might be one of those that shows everything it has to give in it’s small two minute trailer and I saw that it had got a lot of mixed reviews that were far nearer to the negatives than the positives. But I absolutely loved it! It’s the best film I’ve seen in a while. The plot is of course, a well known one, but the film manages to switch it up very well, while still remaining true to the key themes, and important aspects of the story e.g. the mirror and the red apple. The film has a running time of 127 minutes but the pace remains steady throughout, every time I thought the action was going to slow down BAM another twist, chase, or amazing piece of CGI would flash up on the screen, keeping me hypnotized and completed focused on the film in front of me. It didn’t just stick to Snow White either, it subtly incorporates several other fairytales in there for those with a keen eye; a transformed version of Billy Goats Gruff and Rapunzel were in there too. As a bookworm it certainly ticked all my literary boxes. 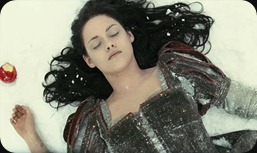 I  also loved how they added in a feminist touch to the storyline through Ravenna’s childhood flashbacks. It was great to get some background as to how she became twisted and narcissistic and to explain why she is so obsessed with beauty. We live in a culture where looks are perceived to be everything. But we have equal rights, at least in theory. But in Revenna’s world (which resembles a medieval-esk period) she is not as fortunate.
I still felt like it left a few questions unanswered, for example why Revenna didn’t just kill Snow White in the first place when she was only a small threat, instead of waiting until she was capable, but hey, since when have fairytales ever made sense? I also think some plot points could have been developed a little more, but seeing as the film was already really long, that wouldn’t have been practical. It is not the most complex film around either, but still had a reasonable amount of layers you could unpick. 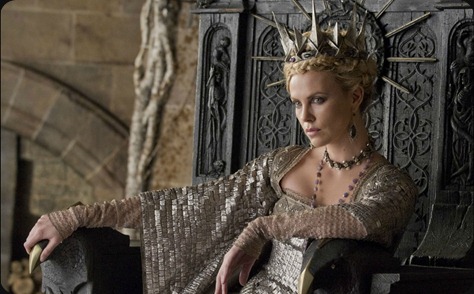 The characterization was also great. I know a lot of people will probably say that there was so much plot wise going on in the movie that there wasn’t enough time to develop the characters fully, but in a film like this that has more of an emphasis on action, I didn’t feel that it was as important, and there was certainly enough for me to grab onto and really enjoy!
The dwarves were great and really funny, Chris Hemsworth was also well cast as the Huntsman even though he didn’t exactly get a lot of material to work with in terms of the romance – but then, I also kind of liked it for that reason. I didn’t think the point of the story was the romance, I know a lot of people complained about the vague love triangle that made an appearance but I didn’t have a problem with it. To me there was never any doubt who she would end up with and I saw the love triangle almost as a metaphor for Snow White’s transformation from young child to accompli 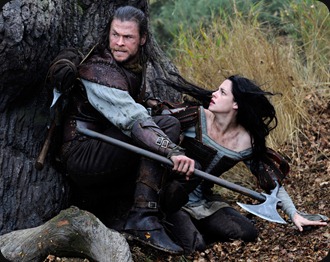 shed woman.
Anti-Kristen Stewart fans will also be pleased to know that for a lead character, she had surprisingly few lines. (So don’t let this put you off seeing the film!) Her job was mostly to pose for reaction shots and look innocent. And actually, I think she did a really good job of this, I believed in her and what she was portraying, and by the end of the film I was really routing for her to succeed.
It is Charlize Theron in the role of evil queen however, that is the true star of this film. She has fantastic screen presence, you really can’t take your eyes off her. She somehow manages to convey strength, beauty, and vulnerability all at the same time. Even while she is sucking the youth out of a young girl on screen, you can’t help but feel a certain kinship/affinity with her.

In all honesty I didn’t really notice the cinematography, (except for all the reaction shots of Kristen’s face) I got too caught up in the movie, so all I can really say about it is that they must of done it well because it was very unobtrusive. The CGI they used though, was absolutely breathtaking, I couldn’t look away. I have never been so impressed. When I’m reading the Grimm fairytales in my head that is exactly how I picture the worlds the stories are set in……just so full of magic and childish wonder. I felt like I was 7 years old again. (It’s very similar to the CGI used in Alice in Wonderland they released in 2010.)

This is exactly what I love about film. Recognizing all the different aspects of Mise en scène ( e.g. lighting, sound, props, acting etc.) coming together just right, to create such a fantastic final piece. It fascinates me how they all work together to create a masterpiece. The balance is so delicate, but for me personally, Snow White and the Huntsman got it just right. It reminded me of a cross between Stardust for it’s effects and magical feel and Quest for Camelot for it’s storyline and the mysterious forest. 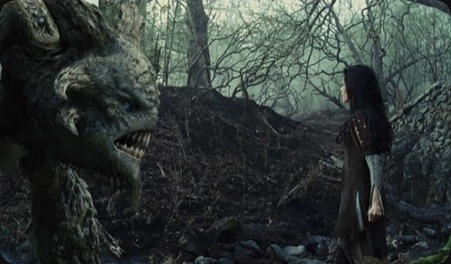 I understand that this film won’t be for everyone so I would recommend it to fantasy lovers, those who love fairytales, and people that like some fun action and CGI. It’s family friendly but will also appeal to teens and adults alike, although it’s probably targeted for the most part towards females. The most important thing about this film? As soon as I came out of the cinema, I wanted to run back in and watch it again! Go buy your tickets people 😉

You can check out the trailer for Snow White and the Huntsman below. (I have to say, this is the best trailer I’ve seen for a film in a while, it gives me goosebumps! The music, the voice over, everything is just perfect to me!) 🙂

P.S. Sorry if any of the wording in this is a bit random, I have a cold at the moment and my brain isn’t really functioning to full capacity.

Originality: (kind of not relevant with this one but in terms of retelling) 5/5
Entertainment: 5/5
Characters: 4/5
Cinematography: 5/5
CGI (Computer-Generated Imagery): 5/5