Overall Impression: A nice fluffy book with some interesting gothic imagery – while not defying my expectations it had 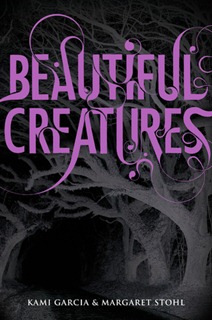 the ability to make time fly by.

When I first picked up on the hype rapidly gaining around this book, I must admit I wasn’t all that interested. It wasn’t a story that instantly struck a chord with me and didn’t sound all that different from most other YA books. Whilst this turned out to be mostly true, there were definitely some interesting elements that made it worth reading. When I discovered the book was going to be released as a movie my resolve finally crumbled (that, and the fact that someone bought it for me cheap and second hand, lol) and so here we are! Although turns out I’m just a bit too late to see it in the cinema anyway…dang it. *Sigh* I just can’t keep up with all these book to film adaptions, there are too many! Seems I am destined to wait for the DVD now.

In Ethan Wate’s hometown there lies the darkest of secrets…
There is a girl.
Slowly, she pulled the hood from her head…green eyes, black hair.
Lena Duchannes.
There is a curse.
On the sixteenth moon, of the sixteenth year, the book will take what it’s been promised.
And no one can stop it.
In the end, there is a grave.
Lena and Ethan become bound together by a deep, powerful love.
But Lena and Ethan is cursed and, on her sixteenth birthday, her fate will be decided.
Ethan never even saw it coming.

Beautiful Creatures follows the protagonist Ethan Wate, a southern bound small town teen. There are two types of people where he comes from, “the stupid and the stuck”. He lives with his housekeeper Amma and his grief stricken father in Gatlin, a town known for its obsession with The Civil War. Ethan cannot wait to get out and travel the world, that is until a whirlwind by the name Lena Duchannes blows into town, a girl he has been dreaming about before he even knew of her existence. Dreams of lemon, rosemary, panic and falling.
Lena is shunned by the town for her unusual looks and shady family connections with Macon Ravenwood the mysterious recluse, but despite this Ethan feels a strong connection with her he cannot shake. Disobeying the demands of those around them the two grown close and fall in love. But there is just one problem, Lena is a caster and on her sixteenth birthday she will be claimed by either the light or the dark and she does not get a choice which. If she goes dark, Ethan will lose her forever. Can he find a way to control fate, and will Lena be strong enough to fight for her future?

My thoughts on this book pretty much all contradict each other, so you’ve been warned! 😛

It took me a long time before I got into this book, I wasn’t captured after the first 100 pages, nor 150, I think it was around the 200-250 mark where I finally got interested. I had issues with the writing at the beginning because there was too much foreshadowing. I’m a big fan of it if it’s done well, but in Beautiful Creatures it was too obvious. Page after page the authors stated how nothing EVER happened or changed in Gatlin and at the same time Ethan having dreams about a mysterious girl he had never met, then a new girl just so happens to show up. So many pages were spent wondering if the new girl could be the one from his dreams which was annoying because lets face it, it’s a YA book we KNOW Lena is going to be the girl and that things are going to get crazy. It was unneeded excess. However, once it got past this roadblock it became a lot more interesting, I was curious to find out more about the Duchannes family, the mysterious curse that plagued Lena and how it came about. Before I knew it the pages were slipping past quickly and it would soon be the early hours of the morning and I’d put the book down for fear I would fall asleep in my 9am lecture if I didn’t get a few hours sleep. (I know, I know, most uni students stay up all night clubbing, I stay up reading a book…) The writing was addictive even though I had a lot of technical issues with it, and some of the gothic imagery was fantastic! There was a lot of old architecture and moody weather that had me reminiscing about Wuthering Heights, where the setting almost becomes a character in itself, and this was by far my favourite aspect of the book! And the caster library! Ohh my gosh I want one! It was described so beautifully with a sweeping stairs descending underground and bookcases that reach so far back that no Caster has ever reached the end of them. My bibliophile brain went into overdrive. 😀

Beautiful Creatures is a long book at 563 pages, and I did feel the plot was slow in places. There were several forgettable scenes I think could have been cut out altogether which would have given the book more of a punch. That being said, it kept me entertained and I kept reading even when it got slow. My main issue with it though was that it fell into a lot of the current paranormal romance cliché’s and for the first half of the book I couldn’t shake off the feeling that I was reading Twilight backwards. The same small town themes and unnatural obsession with someone the protagonist had never spoken to and the same annoying mindless background characters that only exist to be a pain in the backside and nothing else.
There was no description of how Caster magic worked other than its link to emotion, Lena seemed to just reach for it and it was there, like knowing how to walk. It is one of my personal hang-ups about books relating to magic, I like to know how it works, the mythology behind it and so again I was a little disappointed, but here’s hoping it might be explained more in further books!

The make or break point for most of these stereotypical YA books following similar formulas is the characters and unfortunately this book just doesn’t quite cut it. On the one hand, there are some great minor characters in here. I loved the librarian and her need to quote various different books during a conversation, and the fact that Ethan never managed to guess which book they were from correctly led to some fun and heartwarming conversations. Equally Ethan’s bookworm mum had a habit of using anything as a book mark, from a sock to a fork and I loved the quirky picture of her this conjured up in my head. (In fact, this book is best when talking about books, lol.) The Sisters bickering was also fun to read. However the background teens as I mentioned earlier lacked dimension and character motivation. They are pictured entirely as vindictive toward Lena and we get no insight into why they bully her other than the fact they are small town people and this bugged me.
The key to why I liked this book rather than loved it though lies with the main characters. Garcia and Stohl made a brave and intriguing decision to use a male protagonist, something rare in this genre, but unfortunately they just don’t pull it off. Ethan does not sound, act or feel like a guy when you are reading about him, and at the start of the novel I thought I was reading about a girl. It is only when someone called him Ethan that I realized. I can’t fully explain it, but he just doesn’t view the world as a male would and you can tell he has been written by female writers, and then occasionally he would come out with a statement that was so stereotypically classed as male as if to make up for it, which only made it even more obvious. Lena also failed to impress me, the writers keep telling the reader how amazing and unusual she was, but how about actually showing us that instead of letting her moan and whine throughout the entire book reinforcing how entirely un-amazing she is? Geez. I didn’t dislike her, but she fell a little flat for me. And guess what, two flat leading characters leads to one big flat ol’ romance at the centre of the book. Macon, Ridley and Sarafine also suffer from the same issues, the authors work hard to present these visually unique quirky characters but it doesn’t come across in the dialogue unfortunately resulting in bland characters.

Whoa I feel like this review puts a dampener on things. Please don’t get me wrong, I enjoyed reading the book and it is definitely the quickest I have read a book during university so far. I will be continuing with the series, but I am in it more for the plot and modern attempts at gothic imagery than I am for the characters…hopefully the next book will build on this ones flaws!

I would recommend this book to females 12+ that are fans of paranormal romance, witches and gothic imagery. If you are looking for a fun lighthearted book you can read to escape reality for a while, this one is for you. The plot will keep you turning the pages and the writing is easily readable. Just don’t expect memorable characters! 🙂

Sorry guys, I feel like this review is a bit of a ramble but it was a long book and I had a lot of thoughts, lol! I’ll leave you with a quote I liked:

‘Mortals. I envy you. You think you can change things. Stop the universe. Undo what was done long before you came along. You are such beautiful creatures.’

(To read my review of the next book in the Caster Chronicles series, Beautiful Darkness, click here.)

Writing Style: 3/5
Originality: 3/5
Entertainment: 4/5
Character Development: 2/5
Would I recommend this book? Yes, although I would probably turn to other books before this one.