Overall Impression: An odd little book about adolescence and first loves with a few gangsters thrown in.

Well, this book was an experience, I can definitely say 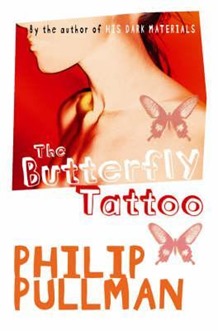 that. It had such an odd jumble of ideas within it that somehow didn’t quite work in cohesion with each other. I was a huge fan of Philip Pullman’s His Dark Materials trilogy, but it hadn’t occurred to me that he may have written other books until I stumbled across The Butterfly Tattoo (also known as The White Mercedes) in a charity shop. I took a punt considering it was cheap and only 200 odd pages, but I must admit I was doubtful. The bizarre cover made me cautious and I figured that if the book was any good I probably would have heard of it since Pullman’s booming success.
All in all this novel turned out to be about what I expecting, a curious mish mosh of a tale with the occasional insightful paragraph. My memory is a little rusty as I finished this book in November, but I will do my best to review it!

Chris Marshall met the girl he was going to kill on a warm Oxford night in early June…
He loved her the moment he first set eyes on her – beautiful, secretive Jenny who rushed headlong into life. Fate brought her to him, and fate would mercilessly come between them to drive their innocent love affair down a dark road of danger and betrayal. And make Chris discover that truth and trust are not the simple ideals he once believed…

Chris Marshall is a innocent seventeen year old in a state of transition, after the recent meltdown of his parents marriage and having to suffer their new significant others all he wants is some time to himself. He decides to take up a summer job with Oxford Entertainment Systems, and is asked to assist with setting up the lighting at the Oxford University summer ball. Bored, Chris wanders down to the boathouse where he rescues a a gatecrasher named Jenny from some aggressive, over friendly guys. Enamored by her beauty he wants to find out more but she disappears into the night. Determined, he sets out to find her.
Meanwhile Chris’s boss, Barry Miller is being chased by a shady gangster like character who is out for revenge. When the two world collide it won’t be pretty.

The Butterfly Tattoo was written three years before Pullman’s famous book, Northern Lights/The Golden Compass. While there are significant glimpses into his brilliant writing in this earlier novel, it is far more patchy and a little harder to find. There are some remarkably insightful observations throughout about the growing pains of adolescence, the reality of honesty and the naivety of first loves. In a few cases I stopped just to reread a sentence three or four times to take it in. Afterwards I often sat back pondering it before coming to the conclusion that Pullman was one clever cookie. I like to think of myself as an empathic and observant person, but I don’t think I could write my thoughts down to make the same kind of impression. This was one short quote I particularly liked, showing some of Chris’s thoughts about Jenny:

‘Chris knew she wasn’t telling him all the truth. She was more complicated than that, and surely she wasn’t as naïve as she made herself out to be. Still, he didn’t challenge her; whatever she said was better than the truth, because she was saying it.’ – Pg 28

On the other hand, there is also a lot of painfully tedious writing in The Butterfly Tattoo that has the potential to send even the most enthusiastic reader to sleep. You’d think it would be hard to make such a short book drag, but it certainly happens in places. It was a shame because for me it did hamper my enjoyment of the book, especially as I knew the author was capable of more. There was also a bizarre rant about fundamentalism added in and although this meant I learnt an interesting new concept and word, its presence in the book felt out of place and didn’t merge well with the rest of the story.

Another issue I had with this book was the plot, apart from the opening chapter the novel moved slowly with several bits of unneeded filler. I think one of the key reasons for this issue was the first sentence of the book: ‘Chris Marshall met the girl he was going to kill on a warm Oxford night in early June.’  While I loved this as an intriguing and ominous start to the novel, it meant that I as the reader knew what was going to happen before it actually did. This probably explains in part why everything seemed to flow so slowly, it was as if I was waiting around for the prediction to come true, making me care less about the everyday intricacies in-between. On the other hand, one element that did impress me was the number of interesting themes and ideas that Pullman tackled. I felt at it’s heart, this story was about the corruption of innocence. Chris starts off as a young chirpy teen full of hope and in the course of the novel he becomes aware of how many people close to him often lie and cheat, that the truth is rarely black and white and not everyone is who he believes them to be. Chris learns these lessons the hard way and it was interesting not to mention saddening reading about him going through it. I guess in this way I found The Butterfly Tattoo quite a depressing read. Yes, we all know that people do bad things, but this novel focuses only on the negative, ignoring any sort of positive human acts because everything Chris sees becomes tainted with anger, deceit and sorrow.

I found the characters in this book quite frustrating. I enjoyed reading about them to a point because they were used to tackle the interesting themes, but mostly they felt like stereotypes. Pullman gives just about enough depth to pull it off, but it’s a thin line and they could have used some further development. There’s Chris, your average teen who reminded me of several other protagonists I have read about in the past. He wanders through the book being affected by the circumstances but we never really learn anything unique or interesting about him. There’s Jenny, the cardboard cut out moody and evasive girl with a traumatic past. Then there’s Barry and Carson, who reminded me of every bad movie attempt at gangster type characters I have ever seen, rolled into one. I also felt bizarrely detached from the characters while reading, which meant I felt impartial about what happened to them at the end of the book. I don’t think that was quite what Pullman had in mind!

So, that about sums up my reading experience of The Butterfly Tattoo. My honest opinion? Probably more of a miss than a hit, although I did enjoy aspects of the novel. The style reminded me a little of Kevin Brooks, so it may appeal to readers who like his work. Usually when I read a book I form a set idea of who it’s aimed, who would enjoy reading it most and then publish it on here, but in this case I’m not too sure. This book is classed as YA, but because it was published in 1992 doesn’t follow the traditional formula we have come to expect from the YA market. While it’s YA it’s definitely on the lower side of the age group as the writing is quite simplified, yet at the same time it had a reasonably graphic sex scene which parents I’m sure would disapprove of. 😛 I would say it’s ideal demographic would be males aged around 12-15 or anyone looking for a coming of age tale. 🙂

P.S. I’ve just found it has been released as a film, who knew!

Writing Style: 3/5
Originality: 2/5
Entertainment: 3/5
Character Development: 3/5
Would I recommend this book? I wouldn’t go out of my way to.

QOTD: What’s your favourite special edition book you own? Or if it’s too hard to pick, tell me about a recent special edition you’ve bought. 😊
QOTD: Are there any books you’ve read where you wished one of the side characters could have their own spin off?
QOTD: Do you have any purchasing/shopping weaknesses that are non-bookish you find hard to resist?
QOTD: Which hoop style is your favourite? Or, tell me about your day?!
QOTD: If you could be an elf or fae for a day, what kind do you think you would be?
QOTD: What’s your go-to comfort book or movie?